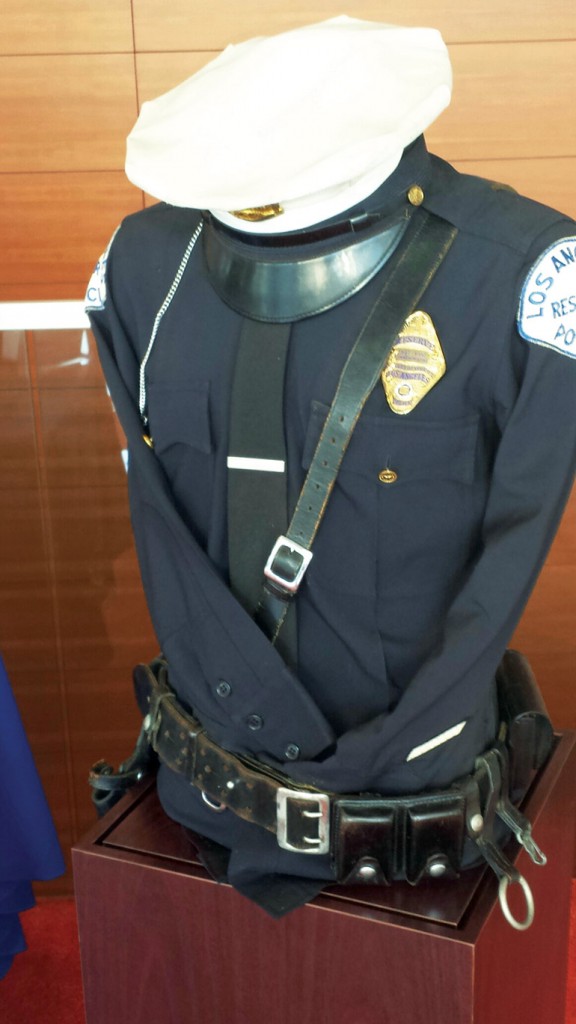 The uniform of Paul V. Martinez

Reserve Police Officer Paul Martinez retired this month after 32 years of service. His father, Paul V. Martinez, served as a reserve officer from 1951 to 1993. During Reserve Appreciation Month, his father’s uniform — the old-style uniform with the diamond-shaped badge, reserve patch and white cover — was on display in the lobby at PAB. Paul’s brother served as a specialist for 26 years. The Martinez family has served a combined 100 years!

Excerpt from the Spring 2009 Rotator article “The History of the LAPD Reserve Corps”:

“Several families have had a couple of generations in the Corps. Paul V. Martinez joined the Corps in 1951. His son, Reserve Officer Paul M. Martinez, remembers his father going downtown to sign up for shifts. In those days, reserves worked primarily special events and details. One time, Officer Martinez recalls, his dad was assigned to work an event at the Greek Theatre — and it turned out he was the only officer assigned to work that event. ‘He had taken me with him,’ Officer Martinez recalls. ‘He conducted traffic control and put me to work because it was a two-man operation back then. He taught me how to manually operate the traffic signal.’ The uniform for reserve officers was different then. There was the diamond-shaped ‘reserve officer’ badge, and officers wore white caps and white shoulder patches.

“In 1983, Paul M. Martinez joined his father in the Corps. ‘We worked together a few times. We used to do these “Care and Share” projects at the downtown mission, where we would provide donated clothes to needy families.’ In a reminder that there is no such thing as a low-risk shift, a man pulled a knife at the event. Father and son apprehended the suspect and took him into custody. His father retired from the Department in 1993 and Officer Martinez is still on the job today. ‘There is so much history with these guys, a lot of which has been lost.’ He remembers a reserve officer who worked with his father, ‘Officer Flores — at the time, he was considered one of, if not the, best marksmen on the LAPD.’”