Pictured above: William “Andy” Anderson with his wife. Officer Anderson has 65 years of combined service with the LAPD, 31 years as a full-time officer and 35 years as a reserve.

Los Angeles reserve police officers and specialists were once again honored at the annual Twice a Citizen Awards Dinner on Saturday, April 5, at the Westin Bonaventure Hotel, in what was the 40th anniversary of the original reserve dinner. Three community leaders were also recognized with Twice a Citizen awards.

The Department Reserve Officer of the Year was Rudy Crusat, of Training Division. He has served as the primary mentor to reserve officer candidates for several years — from recruitment through the testing phases of the hiring process. Officer Crusat has distinguished himself by working over 300 hours. He also received the honor for Specialized Divisions. 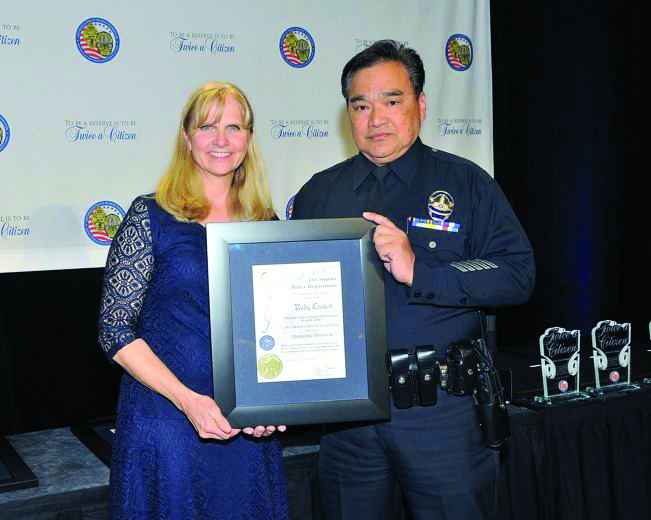 Andrea Friedman was remembered. Andrea, who retired last November after 23 years of service as a LAPD reserve officer and 15 years as secretary of the Los Angeles Police Reserve Foundation (LAPRF), passed away on March 6. Her fellow officers at the LAX Substation were presented with the first-ever Friedman Award for going above and beyond in supporting the Reserve Corps — in escorting Andrea and her husband, Albert, a specialist with the Department, from her hospital to the airport, to a new life that was cut far too short.

LAPRF Co-Presidents Karla Ahmanson and Michael Sellars welcomed the officers and guests, having been elected by the Foundation Board last December.

President Ahmanson said: “A lot has changed since then — 40 years ago when this dinner was established — except for one thing: the unwavering commitment of those in this room to the Los Angeles Police Department.”

President Sellars said: “If anyone underestimates the dedication and the commitment of our Los Angeles reserve police officers, tell them what you see and hear tonight — show them the cover of tonight’s program.”

The cover of the banquet program recognized “Andy” Anderson, who has a combined 65 years of service as both a reserve and a full-time officer. Officer Anderson was at the banquet, receiving a standing ovation and signing a few autographs.

The news was received that LAPD Officer Christopher Cortijo had been critically injured in a traffic collision and Chief Charlie Beck was on his way to the hospital. But before he left, he said: “My time with the Reserve Corps taught me something very profound. And it wasn’t about policing, it was about people. It was about sacrifice. It was about people who would be willing to do such a dangerous and difficult job for no money and little recognition.”

Assistant Chief Sandy Jo MacArthur took the Chief of Police’s place in recognizing the reserve officers of the year and community honorees. Deputy Chief Mark Perez was also there to honor the officers, as Department reserve coordinator.

The three Twice a Citizen community leader honorees were Beau Boeckmann, vice president of Galpin Motors, Inc., who has been deeply involved in many community and philanthropic efforts; Steve Fazio, president and CEO of Fazio Enterprises, who served for many years as a Los Angeles reserve police officer and was later appointed to the Los Angeles Fire Department Board of Commissioners; and Melvin Kennedy, former president of the LAPRF and 32-year veteran reserve officer.

The mistress of ceremonies was Christine Devine of Fox News. John Moschitta Jr. — perhaps best known as the fast-talking man in the FedEx commercials — was the live auctioneer.

The annual banquet is funded by the LAPRF.