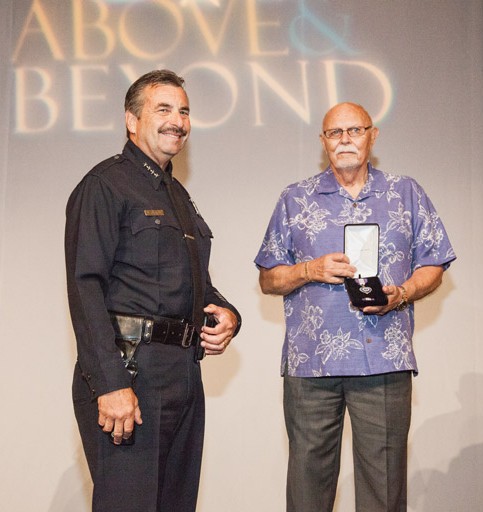 Chuck Huseman received his father’s LAPD Purple Heart from Chief of Police Charlie Beck at the Above and Beyond ceremony on September 4.

On the night of December 22, 1945, when Chuck was about 10 years old, he said goodbye to his father, Norbert John Huseman (serial number E7425), watching him leave for his patrol shift at Newton Division. That evening, his father was shot. He died nine days later, on New Year’s Eve.

As The Rotator reported in “Reserve Corps Learns of Another Hero” in the Summer 2013 issue, “There is a rich history of reserve officers in the LAPD preceding the official Reserve Corps — a largely forgotten history, that is now just beginning to be rediscovered. It is a history of police officers by other names — reserve, auxiliary and emergency — who served in the LAPD prior to 1947, particularly during World War II. One of these officers, it turns out, was wartime emergency Policeman Huseman, who was smack dab in the process of transitioning into full-time. He was scheduled to take the exam in January when he was killed in the line of duty.”