Reserve Officer Bernard Khalili and Commander Blake Chow at the Paris Briefing. On the right are Deputy Chiefs William Scott and William Murphy.

The terrorist attacks on November 13, 2015, “were the deadliest on French soil since World War II … nine attackers killed 130 and wounded 368.”*

LAPD Reserve Police Officer Bernard Khalili was instrumental in organizing a multiagency delegation from Los Angeles in April 2016 to study what happened. His knowledge and connection with French law enforcement and key political leaders has proven a vital resource for L.A.-area agencies, beginning with a delegation to France in May 2011 (see The Rotator Winter 2011 issue). For his efforts, Officer Khalili was named the Department’s Reserve Officer of the Year this past April. He also received the French National Police’s highest award, becoming the first law enforcement officer in the U.S. to receive it.

The delegation’s findings were presented at “The Paris Public Safety Briefing: Preparing Los Angeles for a Multiple Active Shooter Scenario” on June 9 at USC, as an “unclassified” white paper by the Homeland Security Advisory Council (HSAC) with the USC Sol Price School of Public Policy. The project was sponsored in part by Peter Lowy and Westfield. (Westfield has also donated to the LAPRF.)

The Paris attackers “targeted a soccer stadium, bars and restaurants, and a concert hall — all venues they knew would be crowded on a Friday evening.” The nine attackers split into three groups: three suicide bombers to the Stade de France, another group to the Bataclan (Theater), and the other to bars and restaurants in the 10th and 11th arrondissements. The attackers killed a total of 130 people, including 89 at the Bataclan. A total of 368 were injured, up to 100 seriously injured. At the Bataclan, a siege lasted two hours. Shortly after midnight, police stormed the building.

Among the recommendations, of particular note for reserve officers in the field was one under Training/Equipment: “Continue and enhance counter-terrorist training provided to patrol officers.” MACTAC training was implemented after the terrorist attacks in Mumbai in 2008. In fact, the Paris Briefing concluded: “In many ways, the Paris attacks closely resembled the Mumbai attacks. In India, ten attackers mounted a complex operation that unfolded over 60 hours.”

MACTAC training, which LAPD reserve officers attend as a 10-hour course held every year, is for “multiple deadly force incidents occurring simultaneously or concurrently.” In the Mumbai attack, there were 10 members of an Islamic militant organization carrying out 12 coordinated bombing and shooting attacks over a four-day period. 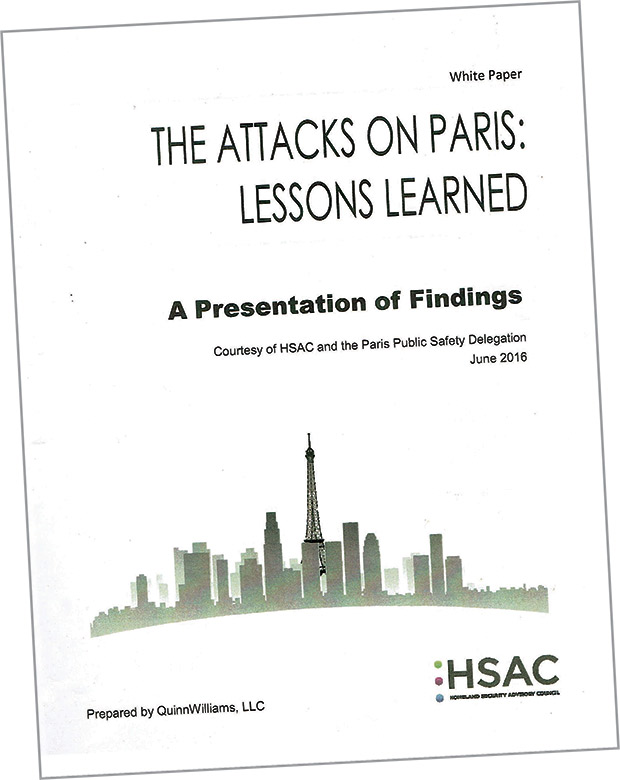 The front cover of the briefing paper

The briefing also concluded that several crucial decisions “likely saved hundreds of lives.” For instance, “police commanders opted not to flood the area surrounding the stadium with resources … authorities determined that this was likely a terrorist attack. Expecting a second wave, police preserved resources to ensure they could respond as necessary. Another crucial decision was made by a patrolman responding to the Bataclan. He opted to violate protocol and actively engage the shooter. (Protocol dictated he should secure the scene and wait for backup.) When the patrolman shot the attacker, the suicide vest [worn by the attacker] detonated and the attacker was killed. No other hostages were killed at the Bataclan from that point.” LAPD veteran reserve officers may recall the active shooter training up at Elysian Park after the Columbine shooting in 1999, which included immediate engagement of an active shooter.

Since the briefing, Officer Khalili has arranged for the chief French Police negotiator (who attempted to negotiate with the terrorists at the Bataclan) to come to Los Angeles and address SWAT negotiators. As The Rotator went to press, Khalili had just arranged for the French patrolman who first entered the theater and engaged the attackers, as described above, to visit Los Angeles. The French officer was awarded by Assistant Chief Beatrice Girmala and Deputy Chief Michael Downing at a special event. He also debriefed command staff and SWAT on his actions that night.

*HSAC, “The Attacks on Paris: Lessons Learned” (Los Angeles: QuinnWilliams, LLC, 2016). Unless otherwise noted, quotes in this article are from this unclassified white paper, which can be found online at www.hsacouncil.org.)