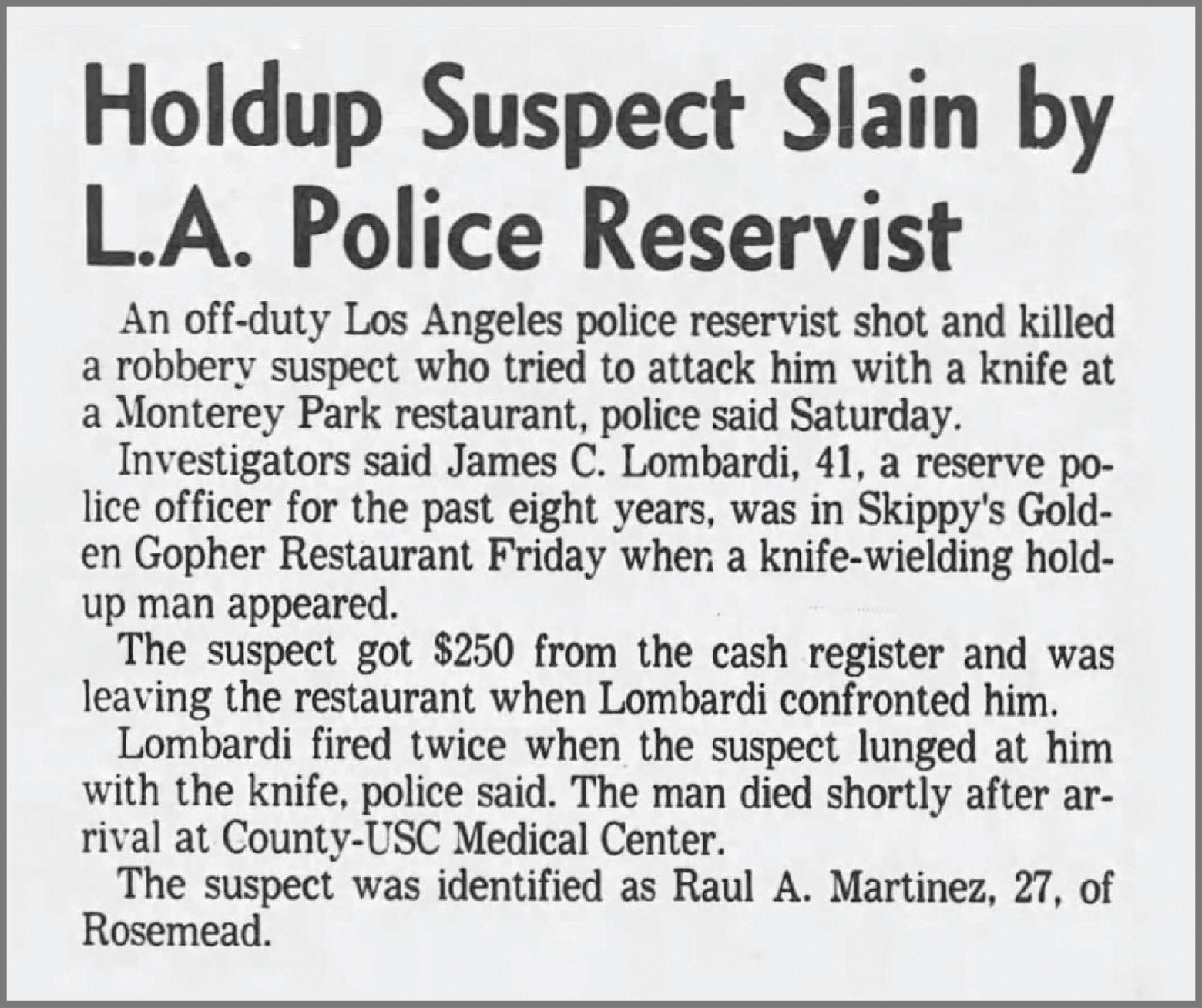 Editor’s note: This is a chapter from the book A Sense of Humor: Reflections of Life, by James Carl Lombardi with Lisa Lombardi O’Reilly (2019, 278 pages). Jim told The Rotator that this 1976 shooting incident was the catalyst that prompted him to get involved with legislation on behalf of reserve peace officers, which eventually led to him becoming president of the California Reserve Peace Officers Association (CRPOA). The book is now available on Amazon.

In 1976 I was working bookies as a Vice assignment. I knew about bookies and their vernacular because I hung around them in Nikola’s Restaurant. In August of ’76, the Department sent me over to get my rain coat near Monterey Park, and I arranged to meet with my business partner, Chuck, at Skippy’s Golden Gopher, which was just up the street. I told Chuck I’d meet him at Skippy’s because I was watching some bookies downtown and I wanted to see if any of them were in there. After I got my rain coat, I went in and sat and waited for Chuck. I was sitting at the bar having a glass of water since I was working, although in Vice you can drink.

The place was full of bookies and they were all doing their thing, and I was sitting there by myself, when in comes this guy who goes up to the bartender at the other end of the bar and hands him a note. The bartender looks at it, says, “No,” and throws it back. I saw that and wondered what was going on. The guy shoves the note back to the bartender who says, “Just a minute.” The bartender walks down around the corner of the bar to the bookies and says, “Here’s a note that guy gave me.” The note said, “I’ve got a .45 and I want all your money. Give me everything out of the cash register.” The bartender just kept saying, “No, I’m not going to give it to you.” The bartender was a Korean War vet and he was shell-shocked, and he went into shell-shock then. He wasn’t thinking because he knew there was a gun involved. Everybody was yelling at him, “Give him the money, give him the money!”

I was looking at the suspect now and knew what was going on. I was carrying my little two-inch .38 and pulled it out, but if he had a .45 I was in trouble unless I surprised him. He came over to me and hit me and I said, “Here’s my money, take it.” Then he went over to the bookies, who had all kinds of money because they’d been collecting their bets. The guy went over there and collected their money and I’m thinking OK, I can shoot this guy, but in the background is all those bookies. I didn’t have much time — if he had a .45 he only had to hit me once.

There was an exhibition cooking thing for the restaurant getting ready for the night, and I thought if he went by me and out the back door, great, he’s gone. But if he stops, because he’s mad at this bartender — he’s cussing at him the whole time saying, “Goddammit give me the money out of the register!,” and the bartender just kept saying no — if he stops and doesn’t go out the back door, I knew he was going to turn around and start shooting.

And that’s what happened. He turned around and stopped and I thought oh, shit. He reached in his bag and pulled out a hunting knife, and I jumped off my stool and yelled, “Police officer! Freeze!” The problem was the chef was right behind him in the exhibition cooking area, and I had to take that into consideration. All the training we do comes to you — you remember it all. He came at me with that knife and it’s true, a knife is just as bad as a firearm. It took a split second for him to get in my area and the only way I missed getting cut open with that knife was by stepping back and hitting him. I gave him a left hook. I hit him, he went by me and fell into all the bookies. One of the bookies was a complete cripple, with two crutches. The suspect fell into that bookie and then turned around and I thought well, I’m dead now, because he was coming at me. I had to forget about everyone in the background. I just wanted to make solid body hits. It’s called double-tap. You shoot two, and you get used to that when you only have five. When he came at me again, I had to shoot. I was his target and we were making eye contact. He wasn’t looking around the room, he was coming at me. So I double-tapped him — shot him twice. I hit him in the body and in the neck and he went down.

He was on the ground and I told him, “Just lay there, don’t move.” Now I was worried about his accomplice outside because I knew he must have somebody out there. When I shot him and he went down, I yelled at the first bookie going out the door to write down the license number on any cars leaving the parking lot. The first one out the door was the cripple. His crutches are still there. I’m exaggerating, but they were there spinning. He was the first one out the door, with the money all over the floor, as you can imagine.

The bookie came back in and said, “Yeah, there was somebody leaving and I got the number.” I said, “Good. Go out to that pickup truck and in the glove box is some handcuffs. Bring them in to me.” Policy is to use the handcuffs — I didn’t want to get near the guy because he was bleeding, but I wanted to make sure I had them. Then I told the bartender to call the police department and tell them an officer needed help. Shots fired. It wasn’t an automatic 911 like it is now. He looked at me and said, “No, I have to call an ambulance.” I said, “You don’t need an ambulance, I’m okay! I’m all right. Call the police!” I had to scream it at him a couple of times before he finally did.

He called the police and they weren’t coming, and I was starting to get worried because I didn’t know if somebody would come in to get their buddy. I hadn’t cuffed him, I didn’t have to, but I wanted to have them in case things got out of hand and somebody came in the door. All the bookies by this time were outside or gone with the wind. Still, I’m not hearing sirens. I told the bartender to call them back again and he did. I was worried about whoever came in that door first because I’m there in civilian clothes. I had my badge out, holding it up, and I had my gun put away where I could get it if the suspect got up off the floor.

The first people to come in that door were civilian detectives. I didn’t know them because they were from another jurisdiction. They didn’t know me and I didn’t know them, but they looked like police. They asked quick questions if I was all right and all that, and I said, “Yeah, LAPD. We’ve got a shooting and a 211 suspect on the ground.” The paramedics were getting there about that time, too. I told the detectives that it was hairy sitting there waiting, not knowing who was coming in that door, when I’ve only got three shots left. They said, “The problem with that is, our policy is that the only people who can go into the building first on a shooting like this is a detective.” I said, “That’s crazy. You want a uniform going in first. You don’t want someone in plain clothes. That’s a danger to them.”

They took the suspect to the hospital and I went and made a statement. It’s OIS LAPD — Officer Involved Shooting and a big investigation. Right away I told them to have an officer take me to the police department to do a breath test, because I’d been sitting at the bar and I had a glass. They said, “Okay, good idea.” They did that, but their breathalyzer was shot, so they drove me over to Monterey Park because I wanted to get that done. They took it, and when I went back to the police station the chief was there and he said, “You’re okay.”

The suspect died in the operating room, then our team from LAPD had to go out. When I had gotten back to the other chiefs office, the commander from LAPD was there and we went back to Skippy’s to do a walk-through. By now, the restaurant was open and LAPD comes in with me and our investigators that do the OIS’s. We went through the whole thing, step by step, with everybody in the restaurant sitting back in the gallery, watching it all.

I called Bev to make sure she knew I was okay in case they had something about it on the news, and after I finally got away from there, I went to my parents’ house to talk to them before going home. I wanted them to see me and tell them that I was okay.

There was a hearing about it, and afterwards the suspect’s mother came up to me in court and said that I shouldn’t feel bad. She told me that if it wasn’t me, it would have been somebody else because he was in trouble all the time. The bullet that hit him in the head should have been the fatal one, but it went in and traveled around the skull and then went out. It never penetrated. The one that got him was the body shot. When he turned around and had his knife out, he had his arm up and I got him through his mid-section.

They ended up treating me like a hero at Skippy’s. Especially the bookies. They liked me, except they couldn’t believe I was police. I really blew my cover with them. It was good my shot was accurate because they could have been hurt, too.

Chuck missed all the excitement. By the time he showed up, he couldn’t get into the place because of all the police and detectives there. I still have that raincoat. The funny thing is, I never used it. It’s out there in the garage where it’s been folded up in the bottom of my helmet bag for over forty years.

Lisa, Jim’s daughter and the co-author of the book, told The Rotator:

“The incident at Skippy’s was a turning point in how I viewed my dad’s work with the LAPD. My mother and I were in the living room watching a television show when the phone rang and my mom went into the kitchen to answer it. Several minutes later I heard her hang up the phone and then I heard her crying, which was something rare. I went in to see what was wrong and she briefly told me that my dad was okay, but he’d been involved in a shooting. She then instructed me to run to my grandparents’ house to tell them before they saw it on the news. I found my grandparents in their living room watching the news, and as soon as I mentioned the shooting my grandmother was out the door to go to my mom.

“I was 13 at the time and Thursdays changed after that. I never went to sleep until I heard my dad get home late at night, and even after I moved away from home, I remained fearful of a phone call from home on that day.”