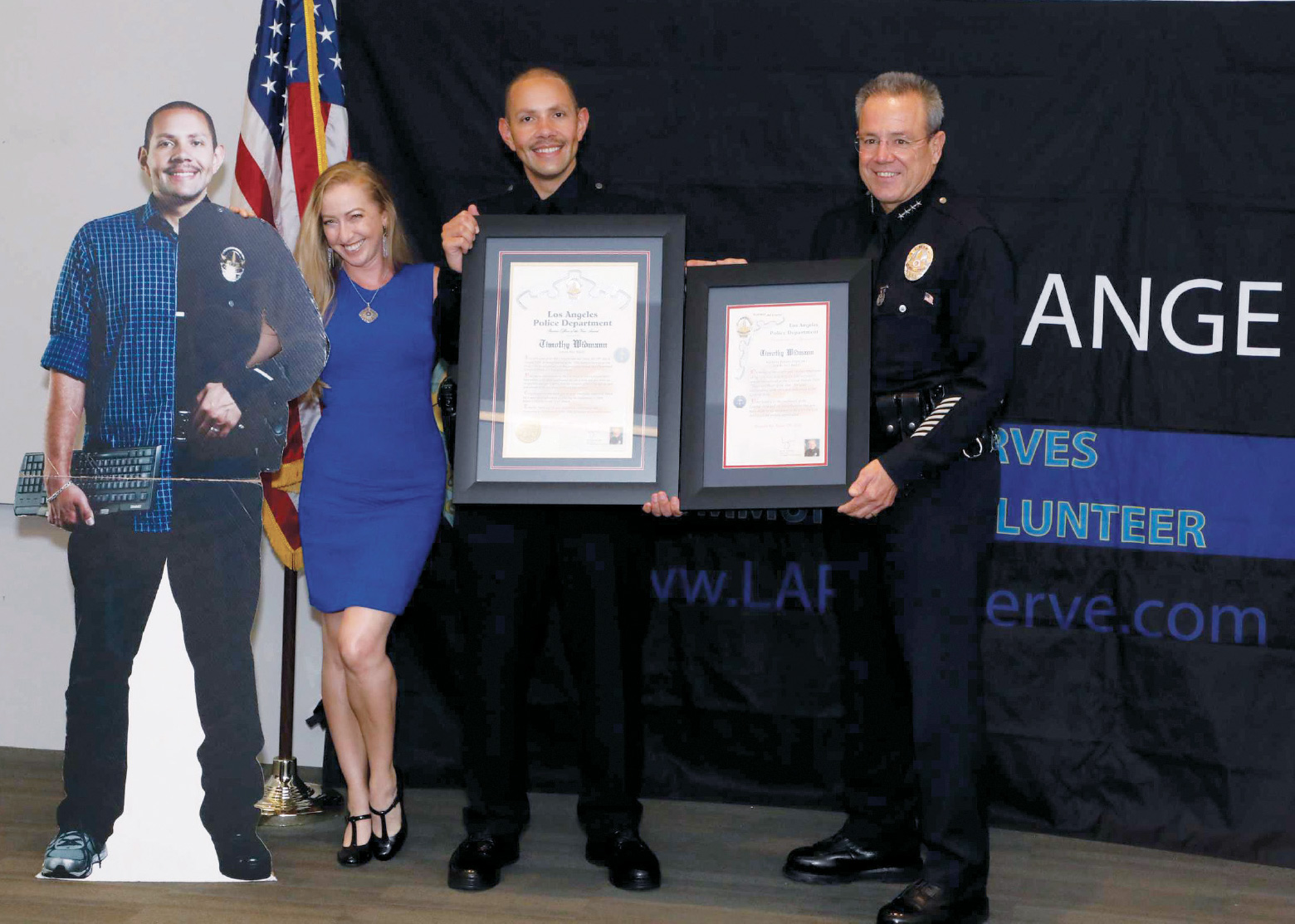 Reserve Officer Timothy Widmann receiving the Department Reserve Officer of the Year award from Chief of Police Michel Moore, with Tim’s wife Victoria and his likeness, used as part of reserve recruitment campaigns.

A reserve officer dinner has been held annually since the 1980s, shortly after the Los Angeles Police Reserve Foundation was established in 1984.1 Among the first locations was the Sportsman Lodge in the Valley, a place dating back to the 1880s that was once a hangout of Hollywood stars during the 1930s and ’40s. It, like so many other places, has been closed during the pandemic.

For the first time, the annual dinner — now the combined Twice A Citizen/Reserve Officer of the Year gala — was not held; it was first postponed, then postponed indefinitely for 2020 because of the pandemic. But there were still officers to be honored, and the gala is an important fundraising event. A “virtual gala” was held online on August 29 via Zoom and also streamed on Facebook Live.2 The running time was about 40 minutes.

The Department Reserve Officer of the Year was Timothy Widmann (Central), who also received the honor for Central Bureau. The other Bureau honorees were Reserve Officers Dr. Paul Strauss (Southwest) for South Bureau, Jacquelyn Frazier (West Traffic) for Transit Services Bureau, Ronnie Hadar (Topanga) for Valley Bureau, Greig Smith for Specialized Divisions (Robbery-Homicide) and Chaplain Specialist Sholom Langsam (Wilshire) for West Bureau. Biographies of the bureau winners start on page 28, and a complete list of Area/Divisional honorees is on page 31.

The event was hosted by Amy Aquino (Amazon’s Bosch), who hosted the gala at the Skirball Cultural Center last year, and Tim Conway Jr. For the festivities, Tim was “riding along with” Adam 12’s Pete Malloy and Jim Reed as the “third officer” in the shop, courtesy of a background photograph. Later on, he quipped he’d only been in a patrol car “three times,” twice in the back seat.

LAPRF Presidents Karla Ahmanson and Michael Sellars spoke. In her welcoming comments, President Ahmanson said: “It is a pleasure to address you all at the Twice a Citizen’s first-ever — and hopefully last — virtual tribute. This is the evening when we honor our own. Reserve officers who have distinguished themselves in their divisions; representatives of the best in community-based law enforcement. Traditionally, it is also an evening when reserve officers get together and strengthen the bonds many have had for years, kind of like a class reunion. I pray we will be together face-to-face next year.” President Sellars said: “It’s unfortunate we couldn’t hold our annual gala this year. Having retired, I was looking forward to seeing a lot of good friends. And, if there was ever a year, if there was ever a time, to recognize and to honor the LAPD reserve, it’s a year like this, it’s times like these. And that’s what tonight is all about.”

While Chief Michel Moore was unable to present the awards personally to the officers, he recorded a short message to the Corps. He said, in part: “This is such a strange year, such an out of the ordinary one, that has us out of our element in so many ways … Thank you and God bless you for the work that you are doing. God knows it’s important and needed, never more than today … As Chief of Police, I’m proud of you.”

A new video on the history of the Corps was played,3 describing the origins of the program and the Corps becoming an official part of the LAPD. After the bombing of Pearl Harbor in December 1941, 1,600 men and women in Los Angeles lined up outside of City Hall to volunteer as auxiliary police, firefighters and air raid wardens. This jumpstarted a reserve program, which was officially established in 1943, and the Corps became a part of the LAPD in 1947. The video described the challenges the Reserve Corps faced in the 1950s and the revamping of the program in the 1960s into the gold standard of law enforcement that we know today.4 The video also featured the Los Angeles Police Reserve Foundation, which was founded in 1984.

In the video, Chief Moore said, “The existence of the reserves over so many decades has demonstrated that this is a department that welcomes and embraces that community engagement, that community involvement, and that we really are, in this shared responsibility of public safety, an all-hands event.”

Assistant Chief Robert Arcos joined from his office, thanking the “amazing men and women of our Reserve Corps” and their families. “This pandemic, these protests that are going on, it would be an easy out for our reserves to say, ‘Not for me, I’m not coming in …’ Instead, you all answered the bell, you stepped up, you’re at the gates, you’re at the desk, you’re out in the field, and you’re a great service to the City. We owe you so much … I know we can do so much better for you, and my promise and my commitment on behalf of myself and Chief Moore is to continue to work hard for you as you work hard for us.”

Commander Gerald Woodyard, who recently headed up the Department’s Community Engagement Group, said: “Individuals are measured by their actions during times of strife and trouble. When I think of the reserves, the first words that come to my mind are family. Not only are you a part of the family in times of comfort, but recently, you stepped up tremendously during this pandemic and during the civil unrest. Thanks for standing on the line with me. Thanks for connecting with the community with me, thanks for thinking of others, as we think of your family. Your exemplary work during 2020 has not gone unnoticed and will not be forgotten. Thanks, family.”

On October 15, the Department Reserve Officer of the Year and Bureau honorees were thanked in-person by Chief Moore, in a small ceremony at Police Headquarters Facility (PHF), with COVID-19 limitations in place.

Next year, the gala is scheduled for April 24, 2021, at the Skirball Cultural Center.

1 A dinner and Twice a Citizen were at one time separate events. While the dinner has never been skipped, LAPRF Former President Mel Kennedy recalls that TAC was skipped after 9/11 in 2001.
2 A recording of the event can be seen on the Los Angeles Police Reserve Foundation Facebook page, under Videos.
3 The video can be seen at approx. the 13:15-minute mark on the Facebook Live replay referenced earlier.
4 Also see the article, “LAPD Reserve Corps: 70+ Years of Protecting and Serving,” in The Rotator Winter 2019, https://laprf.org/blog/the-rotator/.
5 The guests can be seen on the video at the 22:00 and 30:00 time marks.