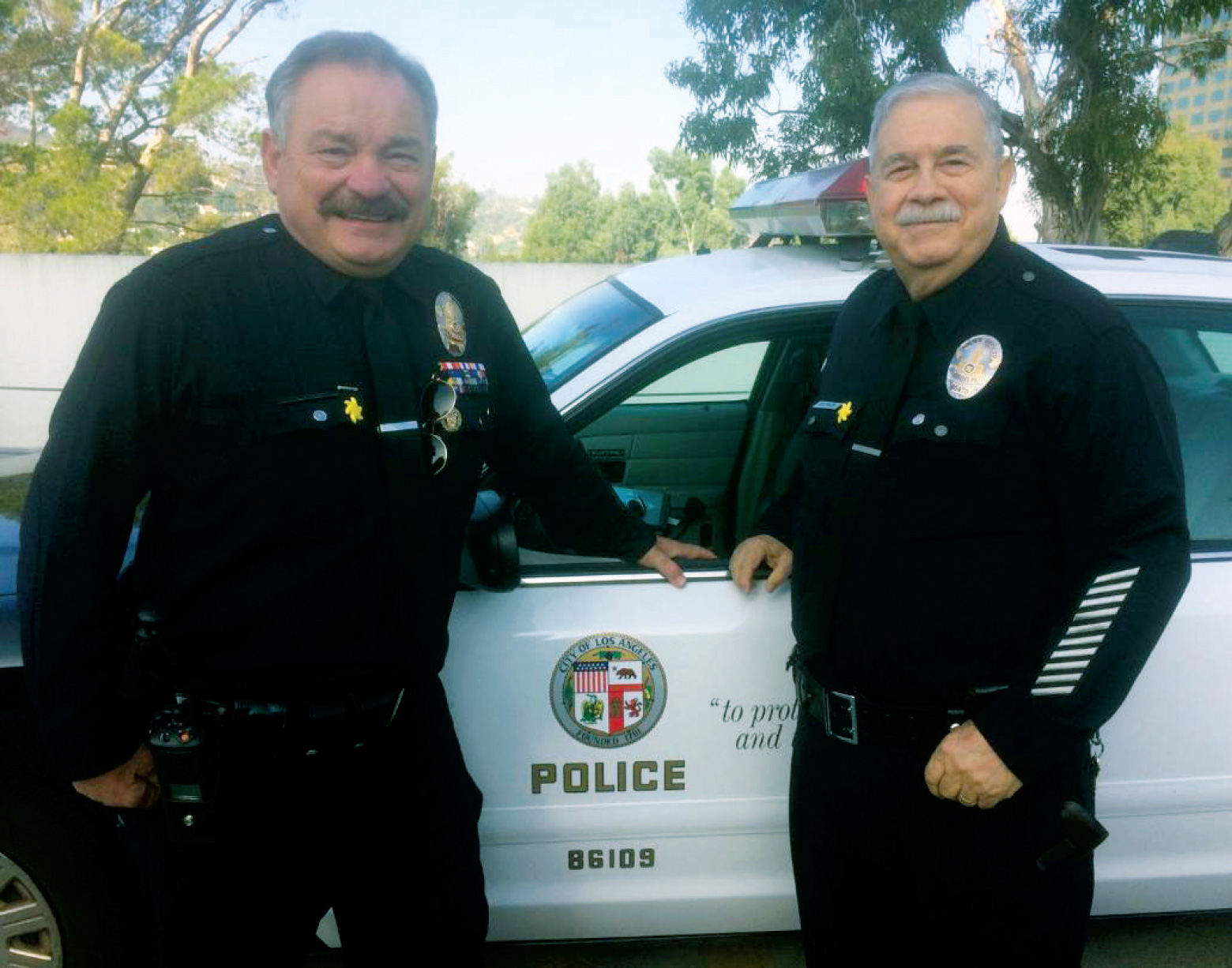 Most of us know about the time and personal sacrifice that members of our Reserve Corps put into the Department. But recently, many members of the Department are retiring and choosing to remain on the job as a sworn reservist. These officers do this for a number of reasons. The interesting thing is that they bring a variety of skills, knowledge and expertise to the Corps. Many have had a colorful career and are actual heroes, although they won’t toot their own horn. So please indulge me as I discuss one such man, and the other officers with him, who we should appreciate.

Officer Frank Pettinato #13587 and now Reserve Officer #6041 has always been a huge supporter of the Reserves and Department volunteers. After spending just over two years in the Army and returning from Vietnam, he was to discover that his time overseas would not be as hazardous as the streets of Los Angeles.

Over the years as a full-time officer, he started the Volunteer Surveillance Team at Hollywood Division and then brought it to West Los Angeles, to work the Westwood Village Detail, in the wild college atmosphere that threatened the safety of visitors on weekends.

Every time there was a task force or special assignment in the Division or Bureau, like the yearly Hollywood Christmas Parade, you could find P3 Pettinato in the mix, taking the lead and organizing the event. Frank seemed to have his own army with his volunteer team and his group of reservists. One evening, a tow truck clipped Pettinato in the shoulder while we were doing an impound. It left Frank in terrible pain and he was transported to the hospital. It was then that most of us found out that the tow truck had aggravated an injury to Frank’s shoulder and arm from when he was hit with buckshot many years earlier. Frank still carried many of the pellets in his arm.

Flashback, 1968 Los Angeles, California: A young man named Gary Murakami had just completed his stint in the Los Angeles Police Academy. He received his diploma and was said to be among the top 10 officers in his class. On February 9, Murakami was starting his second day of active duty and first day in the field, and he was assigned to his training officer, Officer William Brote. Then a call came out, a 311, 415 man with a rifle at an apartment building, 3236 W. 60th St. Great, just what we all want to hear, a naked man with a rifle causing a disturbance. That’s never going to go down well. (Turns out that the “rifle” was a 410 shotgun.)

As the call went out, another policeman and his young probationer picked it up. Richard Harsma #12870 was considered the seasoned vet with two years on the job; his partner that day was Robert Ream, with two weeks in the field. As they were arriving, an Officer Needs Help was issued. Shots fired, an officer down call went out. Harsma instructed his partner to take a position of cover and stay there. They could see Murakami down and writhing in pain.

Very soon, Officer Pettinato, with five months in the field, and his probationer, Tom Felix, with two weeks on the job, rolled up Code 3. On the side of a two-story apartment building, they saw Officer Murakami lying and bleeding on the grass, struggling to breathe. The officers quickly determined that the suspect was in the first-floor northeastern unit of the building. Immediate action had to be taken. Harsma, carrying his service revolver, made his way to the opening of the building. Pettinato, after telling his partner to take cover with a shotgun, did a military crawl to the opening of the building, cradling the second shotgun from the trunk. He soon caught up with Harsma and both officers made their way down the hallway to the suspect’s unit. Harsma described seeing the suspect standing in his apartment with nothing on but a T-shirt and a shotgun in his hands. The suspect, a man named “Cash,” was facing the side window, waiting for responding officers to get to the wounded Murakami. Both officers knew what they had to do, and then fate stepped in. The officers were making their way to the apartment door, side by side, when another officer poked his head around the corner behind the advancing officers and yelled from his position of safety for the suspect to surrender! This immediately drew the suspect’s attention to the open doorway, where he saw Pettinato and Harsma coming at him. Cash immediately fired down the hallway, hitting both officers with one shot. Harsma is left-handed and Pettinato is right-handed and was to the left of Harsma. One blast hit both men in their strong sides. Pettinato took most of the blast to his right shoulder and arm, causing him to be able to only hold the forward stock of his shotgun and not be able to fire. Harsma took most of the hit in his gun hand and forearm and dropped his weapon. Later he saw that his revolver was pockmarked by the pellets.

Both officers, realizing that they were wounded and unable to return fire, made a tactical retreat to safety. They were able to get behind a black and white, where paramedics were able to render aid and take them to Central Receiving Hospital. More about that later. 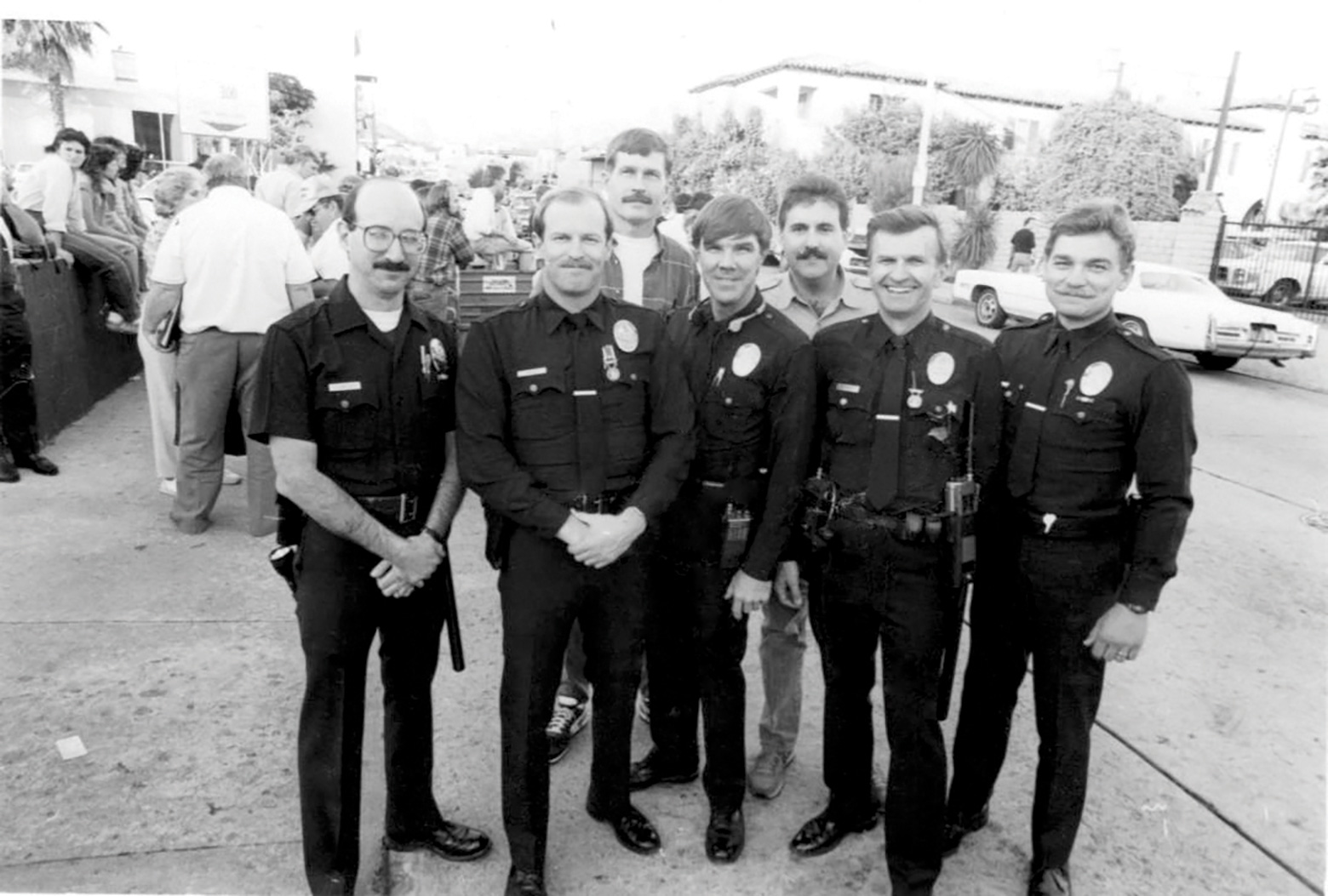 Back at the scene, Murakami was down on the ground about 15 feet from the window where the suspect continued to fire at the officers. In a scene that was recreated on the Adam-12 TV show, two officers, Timothy Walgren and Dale Stevens, drove their patrol car onto the lawn between the wounded Murakami and the suspect and pulled the officer to safety while a third officer, Gerald Woempner, provided cover for the rescue operation, even removing the screen and drapes in the window to get a better view of the suspect. The officers immediately took Murakami to Morningside Hospital, where he passed a short time later. Sadly, one week after friends and family had gathered to celebrate Officer Murakami’s graduation, they now had to hold his funeral services with his young 4-year-old son present. The suspect was eventually shot and killed by Officer Glenn Wiggens after tear gas was thrown into the apartment.

Murakami’s little son, Keith, grew up and later joined the Department and served for a while. Murakami’s grandson also joined LAPD and is still on the job. Pettinato remained on IOD status for the remainder of his probation and carried most of the 44 pellets in him for the remainder of his full-time career and into his current reserve career. Harsma required two surgeries to remove pellets from his hand and forearm. Interestingly, both Pettinato and Harsma had their children follow them into the LAPD. Frank’s son, Michael, is currently a detective and Richard’s daughter, Annissa, recently retired as a detective.

Real life can be so fickle and full of irony. It oftentimes is not fair. Even after enduring the tragic events of that morning very early in their careers, Pettinato and Harsma went on to have very storied careers. I briefly mentioned Pettinato, but Harsma later went to Metro and SWAT and was at some very newsworthy events, such as the SLA shootout, North Hollywood bank robbery and the ’92 riots. When Harsma went back to duty after being on the mend, he was assigned a U-Boat (report car) and, unbelievably, his first call was to the same address where he had been shot that fateful day. Another unit noticed and decided to handle that call for him. Harsma went on to serve some 33 years. Pettinato now has 50 years of combined service, including reserve time.

For their part, Officers Walgren, Stevens and Woempner all received the Medal of Valor. Gary Murakami was posthumously awarded the Purple Heart after it was established in 2009 and first awarded in 2011. Had it not been for an officer’s poor tactics (who shall remain nameless by request), Pettinato and Harsma could have stopped the suspect much sooner. I feel that this in no way diminishes their bravery or lessens the lifetime wounds that they received that morning long ago in 1968. It is my sincere hope that our Department management will take notice and correct this omission to the ranks of the Purple Heart recipients and add these two fine officers who spent a lifetime of service after receiving wounds. They have not only mentored dozens of officers, but each also raised two fine officers to follow in their footsteps.

So there you have it. The next time you see some older officers with gray hair and rows of hash marks walking among our Reserve Corps, don’t just assume they are “only” another reserve. You may just be rubbing shoulders with a bona fide hero. They just won’t tell you that.