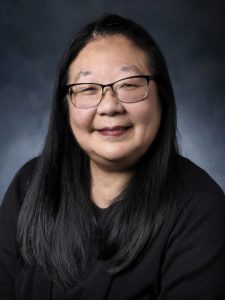 Reserve Police Officer III Ellen Kanda’s tenure with the Los Angeles Police Department began in 1988, when she started as a reserve officer assigned to Central Division. In the 32 years she has been with the Department, she has gained a wide variety of experience — having worked with the Cruiser Gang Task Force, the Department of Transportation Bandit Taxi Cab Detail and every “COPS 4 TOTS” Car Show, and as an advisor for the Hollenbeck Explorers.

During this past year, Officer Kanda could be counted on to regularly attend the CTD reserve officers’ monthly meetings and assist with many of the sobriety checkpoints and pedestrian crosswalk details CTD held each month. Officer Kanda attended all training days and field enforcement days. She has been, and continues to be, an indispensable leader for CTD and the Department.

She consistently demonstrates a superior work ethic, and genuinely cares for the City of Los Angeles and its community members. She is equally concerned for her fellow police officers. Her leadership talents and dedication have helped to contribute to the overall effectiveness, productivity and esprit de corps of the reserve officer program at CTD. 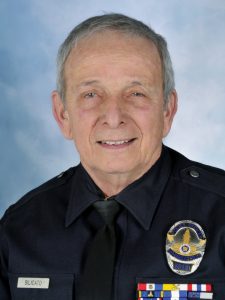 Reserve Police Officer I Carmen Silicato began his career at Foothill Division in 1981 and has remained in this Division for almost 40 years. In his “other” career, he owns and operates a local pharmacy.

His proactiveness and passion for traffic enforcement have been critical in reducing traffic-related incidents. His mission includes educating the public, enforcing vehicle code violations, and preventing traffic collisions and casualties. He routinely works past his required hours, citing an average of 10 speeding violations per shift on a consistent basis. Always the first to volunteer for any assignment, Silicato assisted in planning, coordinating and carrying out the first ever Volunteer Traffic Awareness Task Force in Foothill Area, consisting of Volunteer Community Patrols, Valley Traffic Division and reserve officers from throughout the Valley Bureau. Volunteers utilized radar guns to track speeding, and violators were then stopped and either warned or cited. As soon as Department activities resumed from COVID-19 protocols, he returned to conducting traffic enforcement within the Division.

Officer Silicato is passionate about his duties and providing quality service to our communities. For the past 24 years, he has been involved in, and looks forward to, visiting Children’s Hospital of Los Angeles with other reserve officers to bring cheer and smiles to hundreds of children battling cancer and blood disorders.

Silicato’s exemplary work ethic has led to him receiving numerous commendations through the years for top performance, professionalism and courtesy. His passion, devotion and perseverance in 2020 should be commended, and we take great pride in nominating Reserve Police Officer Carmen Silicato as our Reserve of the Year. 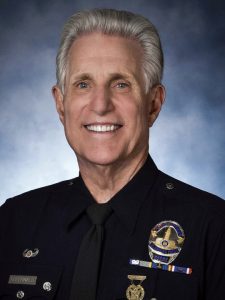 Reserve Police Officer IIIA Stephen “Mike” Greenwald was nominated by Air Support Division (ASD). He has been a member of the Los Angeles Police Department for 31 years and currently serves as the ASD assistant reserve coordinator.

During 2020, Officer Greenwald distinguished himself by working over 250 hours as a Tower Operator. Additionally, he supports the City’s Personnel Department in its police recruitment meetings twice a week for civilians interested in joining the Department reserve officer workforce.

In his professional career, Greenwald serves as an account manager for Alta Dena Dairy, and he is also a very active member of his community, including local neighborhood councils and associations.

Each year, Officer Greenwald is involved in the planning and execution of one of the most important ASD events, the Southern California Public Safety Aviation Coordination Exercise. His early involvement, organization and understanding of what’s required to coordinate the acquisition of food and associated supplies ensures the success of the exercise, which is designed to test the operational capability of regional public safety aviation units in transporting personnel in and out of Hooper Memorial Heliport. The six-hour emergency aerial exercise involves the coordination of over 250 helicopter arrivals and departures and the hosting of over 600 participants, including local VIPs and LAPD command staff.

As a divisional assistant reserve coordinator, Officer Greenwald assists with the coordination of meetings and ensures ASD reserves are updated regarding training. His attention to duty is exemplary and represents his staunch commitment to serve the Los Angeles Police Department. Air Support Division is proud to select Officer Greenwald as our 2021 Reserve Officer of the Year. 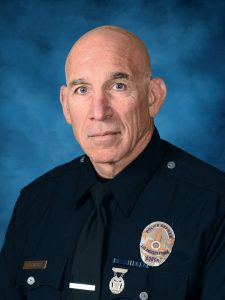 Reserve Police Officer I Paul Strauss was raised on the East Coast, pursued a career in the medical field and then made the decision to move to Los Angeles for the weather and a practice at Cedars-Sinai as a senior anesthesiologist.

Officer Strauss joined the Los Angeles Police Department Reserve Corps in 2017 to bring his medical experience and expertise to the streets directly and indirectly. He was first assigned to Hollywood Division and transferred to Southwest Division in 2018, where he has worked assignments in Patrol, Vice and Narcotics.

He has also taken the initiative and presented Southwest Division with a “Stop the Bleed” training — part of a national initiative designed to teach bleeding control techniques to first responders involved in mass casualty or active-shooter events. Strauss has been able to apply real-world experience and stress the importance of proper techniques to save a life, while emphasizing that it is a first responder’s duty and responsibility to act quickly to care for the citizens of Los Angeles.

Officer Strauss’ full-time career and other personal commitments have not prevented him from volunteering time and energy to the Southwest Area. Giving a constant two days a week or more, depending on his primary work schedule, Strauss has volunteered over 3,000 hours in a four-year span. During the civil unrest and COVID-19 pandemic, he continued to participate in many details, all the while staying committed to his duties at the hospital.

Reserve Officer Strauss has developed a continuing series of relatable videos for the Department website about the health and wellness of our officers, and has also expanded his training efforts to assist several other Department entities. Reserve Officer Strauss should be recognized for his motivation, excellent teamwork, professionalism and work ethic during his assignments to Southwest. He is truly “Twice a Citizen”! 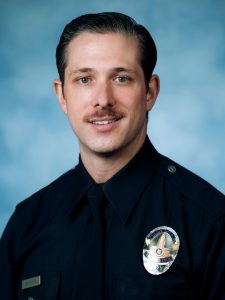 Central Area is proud to select Reserve Police Officer Carter Magnin as our Reserve Officer of the Year. Officer Magnin has been a reserve police officer with the Department for 13 years. He began his career as a Level IIIA Reserve Officer and with commitment rose through the ranks to become a Level I Reserve Officer.

A native of California, RPO Magnin attended USC, where he received his degree in political science. Not pursuing this field, he became a commercial real estate broker instead. Although that was a noble profession, Officer Magnin felt he wanted to “give back” to the community and become a Los Angeles Police reserve officer.

He joined the Department in 2008, and his first assignment was Hollywood. He transferred to Central Area in 2010, where he has remained. Officer Magnin has worked both Patrol and foot beat assignments in Central Area, especially within the boundaries of Skid Row, where he has interacted with and provided service to numerous citizens experiencing homelessness over the years. He has distinguished himself as a peer leader and quickly assumed a leadership role within the Central Area Reserve Unit. He assists in communicating with all reserve officers assigned to our division, which includes Department Mandates as well as work details requested by the Officer-in-Charge of the Community Relations Office. Officer Magnin also leads the monthly reserve officer meetings and provides or arranges training on various subjects.

Officer Magnin is consistently one of the first to volunteer for a detail or assignment and has been a consistent and dedicated asset to the Downtown Los Angeles community. His work ethic and the countless hours he volunteers truly highlight the meaning of “Distinguished Service.” 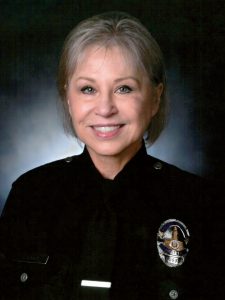 Operations-West Bureau is honored to nominate Reserve Police Officer III Eileen Lomis from West Los Angeles Area as our Reserve Officer of the Year for 2020.

Starting as a volunteer in the Detective Division in 2018, Officer Lomis was quickly drawn to the investigative nature of the work and began taking on more challenging tasks. She soon applied to become a Los Angeles reserve police officer. On January 4, 2019, Officer Lomis graduated the Police Reserve Academy and has been functioning at the level of a police detective ever since.

Officer Lomis now handles a full detective caseload for Robbery/CAPS investigations and conducts follow-up investigations for assigned criminal cases, including criminal complaint interviews and the filing of those complaints. Officer Lomis was recently assigned a complex robbery case where the victim had been shot at during the commission of the crime. She identified the suspects with forensic evidence and met with the reluctant victim, who positively identified the suspects. Locating the suspects in Nevada, she coordinated the arrest with Las Vegas Metropolitan Police Department, obtained the felony filings and extradition arrest warrants, and returned them to Los Angeles.

Officer Lomis is dedicated, self-motivated and a tremendous asset to West Los Angeles Detectives. She is an unbelievable investigator and clearly an exemplary representative of the Reserve Corps.

Reserve Officer Lomis volunteers long hours and is always available to assist her partners with their investigations. She keeps a global perspective when planning, making decisions and responding to daily developments in the workplace. Officer Lomis has shown extreme dedication and great results, and has been crucial in reducing the fear and incidents of crime in the communities of West L.A.