The new plaque for Reserve Police Officer Stuart S. Taira, prior to being placed. The ceremony was scheduled for June 26, as The Rotator was going to press.

It was a time-honored tradition: Reserve Recruit Academy classes had to make sure Stuart’s plaque, placed under the magnolia tree outside the Jack Webb bungalow classrooms, was kept smartly polished. Year after year it was done. The plaque was to be preserved during the construction and renovation of the Academy in the mid-2010s,1 to be stored for safekeeping until it could be returned. But it was lost, nowhere to be found. As this article was being finalized, plans were underway to rededicate this plaque at Elysian Park Academy, along with a granite block honoring the Corps and so many others who have served over the past century. Officer Johnny Gil in the Reserve Unit downtown helped to get the plaque ready. The scheduled date for the ceremony was June 26, 2021. 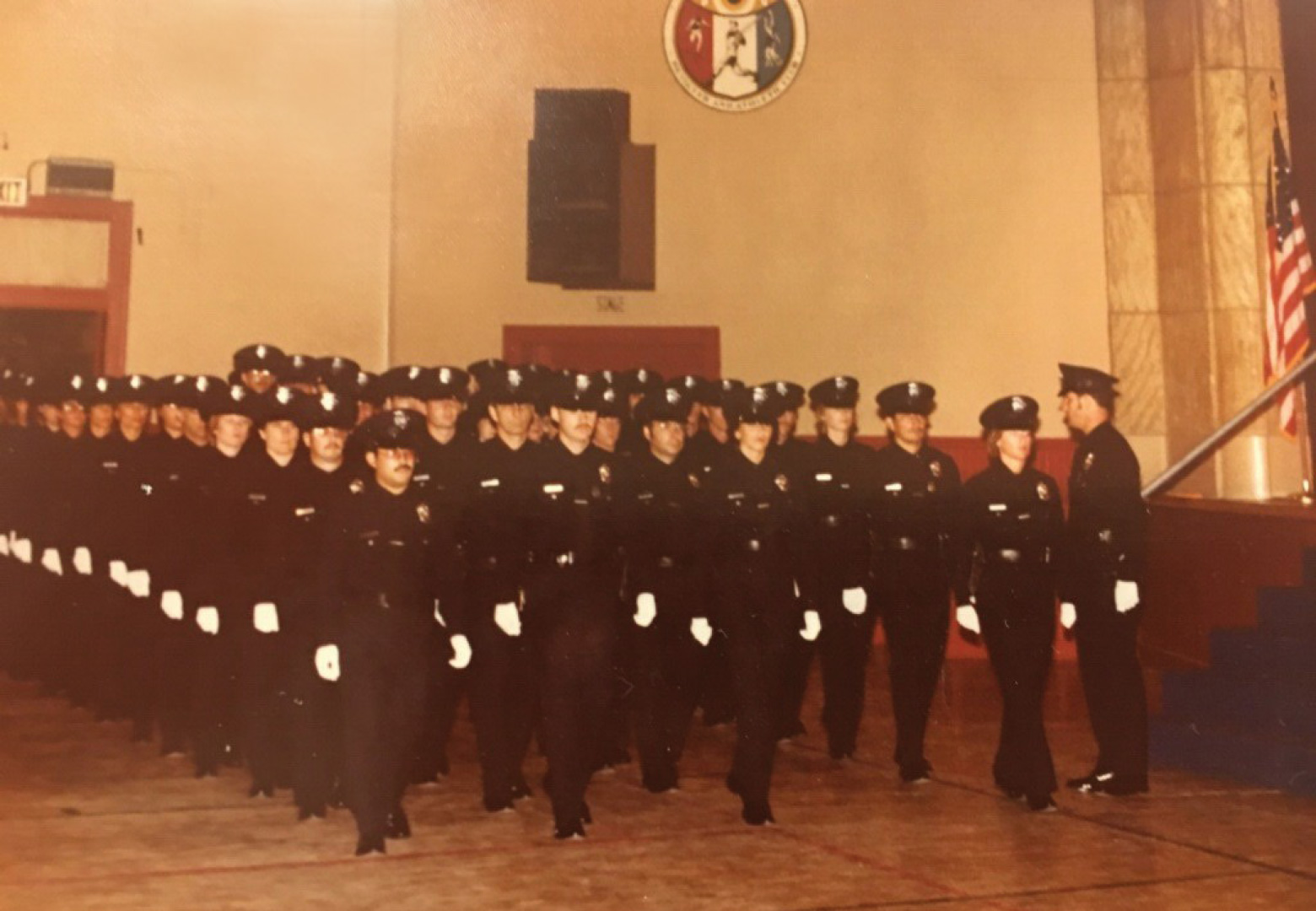 10-81R Academy graduation; Taira is in front on the left

Replacing this lost plaque was the steadfast, resolute, unwavering mission of many. Reserve Officer Charlie Nicgorski had posted an update in the LAPD Reserve Police Officers Facebook group. It became one of the most popular and engaged posts. Chief of Police Michel Moore commented in the group that he had been working morning watch at Newton when Taira’s fatal accident happened. “He was a hero,” the Chief wrote.

The hero of the modern-day Reserve Corps — a legend. Stuart Taira wanted more than anything to become a cop. But he fell below the height requirements enforced at the time. Stuart’s solution was to become a technical reserve. As Reserve Officer Mel Kennedy relates, “Stuart was one of the first reserve officers to carve out a specialty, as a videographer in Air Support. He had wanted to become an observer officer, but couldn’t because he didn’t have the patrol experience. So, he made the best of it, excelling at what he chose.”

Reserve Officer Baxter Duke was an Explorer with Stuart in the early 1970s. “We did a lot of bike licensing and basic car meetings,” a precursor to the Neighborhood Watch programs. Officer Duke told The Rotator that back in the day Stuart was said to have been the inspiration for a character in an Adam-12 TV episode. The episode, entitled “Northeast Division,” featured an Explorer repairing Officer Jim Reed’s TV set, taking it all apart at the station and putting it all together. “Stuart was known for fixing things.”

Retired Reserve Officer Paul Hill: “I remember Stuart excitedly telling me that he was going to be an LAPD reserve. He was so proud.”

Reserve Officer Steve Fazio talked about his classmate in 10-81R. “Stuart sat behind me in the Academy, his serial number one digit different. A great guy. Kind and super smart.” Fazio said Stuart was also working with the Department on a robotic system for the bomb squad, long before it became a standard tool.

Bonnie Roberts: “My husband, Seymour Roberts, and I were in the Academy with Stuart. He was truly a wonderful person with a delightful personality. When he died, I got in touch with multiple nurseries until I found one who donated a magnolia tree to be dedicated to Stuart. It symbolized the fact that, like the magnolia tree, Stuart may have been small, but he was very strong.”

With the help of retired full-time Air Support Pilot/Reserve Officer Terri Lincoln, we reached out to Air Support veterans.

The LAPD memorial street sign for Officer Taira. The street signs project began in 2014; the signs are placed at or near where officers have fallen within the city of Los Angeles

Pilot Larry Clarke, now retired and working as a fire chief in an Idaho town when we spoke to him, had just finished his shift in the helicopter on the fateful day, handing the ship to the next crew. It was a difficult location to land and take off: “Telephone wires were strung pole to pole. You needed to do an out of ground effect hover; a steep vertical ascent takeoff.”

Bob Percy spent 38 years in the Army as a pilot and served as an accident investigator. He told The Rotator that Newton’s laws can make a helicopter an odd bird, not so easy to fly. The tail rotor is there to prevent the tendency of the ship to push against the force of the main blade; otherwise, the ship itself would be spinning. There are pedals to push left and right, a bar to go up and down, and a throttle to moderate the power — the higher you go, the more power you need to maintain your position. A throttle was one of the reasons, Percy said, that the Department back in the day thought Motor officers would make good command pilots. “It took a while before veterans of the Vietnam War would begin their careers in ASD.” 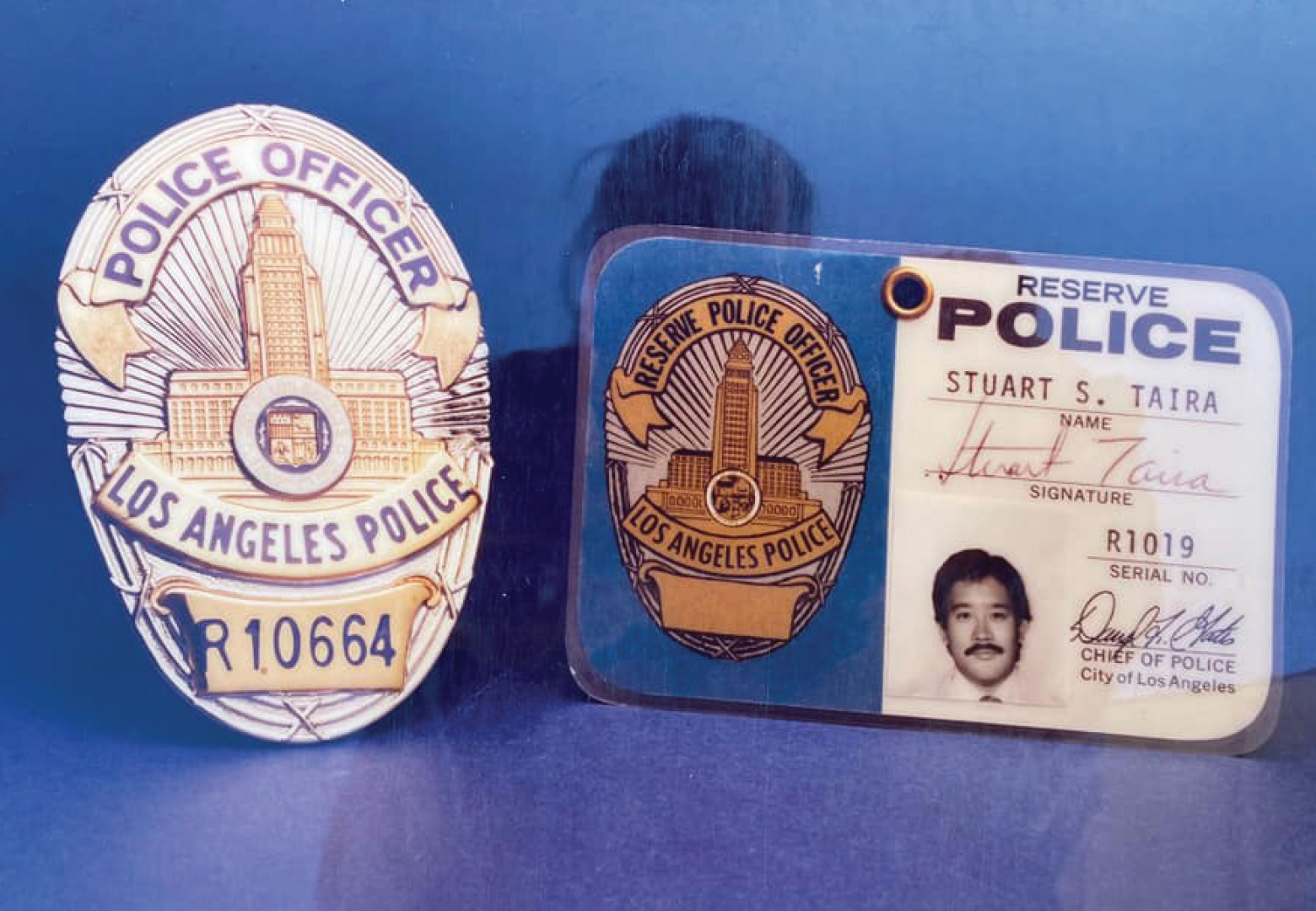 A freak tornado hit downtown Los Angeles. As the National Weather Service reported that day: “It was clear from the pattern that the damage was caused by a small-scale rotating vortex.” It was here that the tragic events unfolded. The LAPD dispatched an Air Unit — a Bell Jet Ranger helicopter — to the area, according to reports at the time. On board were pilot Officer Ronnie Hansen, Tactical/Observer Officer Tom Brooks and Reserve Officer Taira as a videographer. After taking film of the area, the unit landed at a command post at Broadway and 51st at approximately 1900 hours.

Retired Sergeant Richard “Dick” Eyster provided The Rotator with a compelling firsthand account of what happened: “I was working the PM Watch on March 1, 1983… A command post had been set up at 51st and Broadway to help control the looting that was going on during this disaster.

“Stu was a dedicated reserve officer. He was up to speed on ASD’s latest TV equipment. He had flown off and on during the day watch to provide a live view of what was going on in the streets. There was heavy rain all day and into night as well. Stu volunteered to stay and work another shift (PM Watch) as no one else present knew how to operate the TV system.

“The question then was, who would fly the mission at the command post? Sergeant Ron Hansen and I were at the Glendale Heliport. We agreed that the first observer to show up would handle the mission. Sergeant Hansen’s observer showed up before my observer did. (The term ‘tactical flight officer’ did not come into use for several more years.) So Sergeant Hansen, observer Tom Brooks and Stuart Taira headed to the command post at 51st and Broadway.

“The weather was so bad, no one was flying regular Patrol; rather, we were available to fly on an as-needed basis. I was the on-call helicopter with my observer, Officer Bob Cuipa. 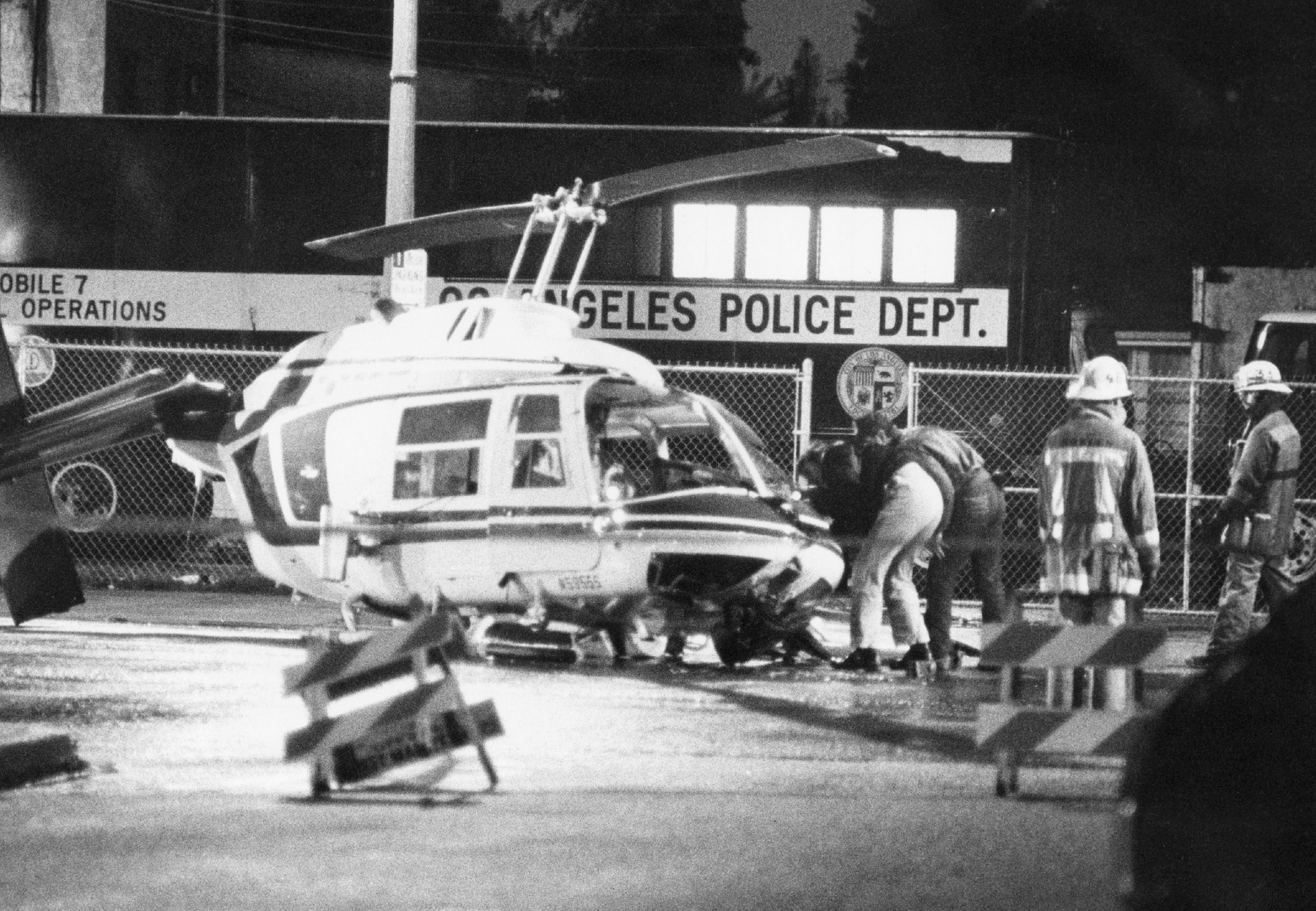 “We received a report that the Stone Canyon Dam was failing. Cuipa and I responded. After checking the dam, we monitored a help call at 51st and Broadway. Control was asking for a helicopter. I told Control that we had a helicopter at the CP. Control came back and said the helicopter was down and they were the help call. We responded to the location and helped Metro with the situation. Lieutenant Ken Hale was there on the ground. I instructed him on how to shut the battery off. He was concerned over the flashing strobes setting the jet fuel on fire.

“It is a sight I will never forget. Not knowing for a while who was under the white paramedic sheet. During the entire time of my flight to check the dam and respond to the downed helicopter, I have never flown in such severe weather and heavy rain. Stu was a hero…”

Stuart’s helicopter had taken off to respond to a burglary-in-process call. As the Air Unit took off, it struck a power line, crashing to the ground, the rotors continuing to spin. Taira was able to escape the ship but noticed his partners were still trapped inside and returned to rescue them. He was struck by the rotating blades and was killed. Hansen and Brooks subsequently escaped with minor injuries.

Two officers appeared at the Taira home on that fateful night. They spoke with Stuart’s twin brother, Steve, and with an aunt, and it was arranged for them to speak with Stuart’s parents about what had happened. A tragic moment: a family learning of their lost hero. 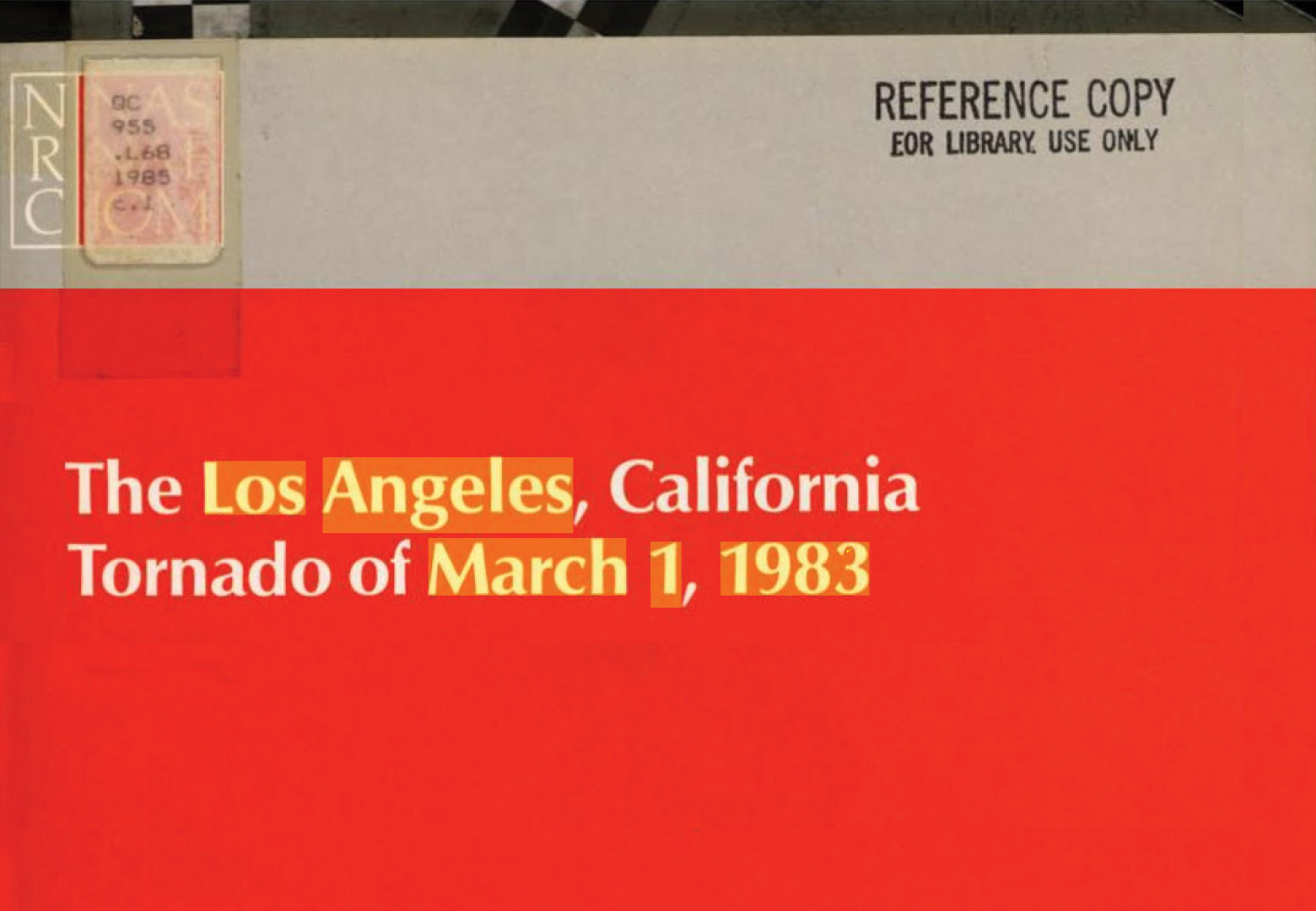 The original report of the tornado that hit downtown Los Angeles, from the library archives

His mom said of her son: “He was a kind boy. He would come home to visit and help me in the kitchen, asking what’s going on. He used to joke, ‘What’s the scam, Mom?’” One night, a helicopter buzzed over the Taira home, a spotlight shining from above. His mom said, “Of course I knew it was Stuart.” When he joined the Department, her son told her: “Don’t worry, I’ll be in a helicopter, nobody will shoot me.”

Former Specialist Mark Galoustian said, “I owe him my life. He saved me long after his death.” In 1991, working for the Hawthorne Police Department, Galoustian was in a helicopter crash. “We went down and I thought of him and that is why I’m here today. The engine was running, the blades spinning. I thought very hard about what to do in that moment.”

Retired Reserve Officer Bert Szathmary: “Many memories of the funeral service. Out of all I have been to, I really believe that was the saddest of them all. A true hero, giving his life in an attempt to save his partners.”

Taira at his Academy graduation, with Chief of Police Daryl Gates

Stuart was interred in Evergreen Cemetery in Boyle Heights. Evergreen was established in 1877 and, as Wikipedia notes, “is notable for never having banned African-Americans from being buried at the cemetery and has sections for Armenians, Japanese, early white settlers, and a large section of Mexican graves.” There are currently 300,000 people buried there.

Adding to the family grief, Stuart’s father died one month later, to the day. It was said, as one would conclude, that he died of a broken heart.

In 1984, Taira was posthumously awarded the LAPD’s Medal of Valor. Also receiving the award that year were fellow officers who had come to the aid of the helicopter. In 2011, the family received Stuart’s LAPD Purple Heart in the inaugural ceremony of that award.

Steve remembers something his brother once told him: “Most people spend a lifetime searching for something they want to be or do. I found what I want to do.”

When The Rotator originally contacted the Taira family, we asked them to describe Stuart. His sister June said, “If you want to know Stuart, you only have to look at yourselves. He was like all of you: with a passion to serve. That was Stuart; that is all of you.”3