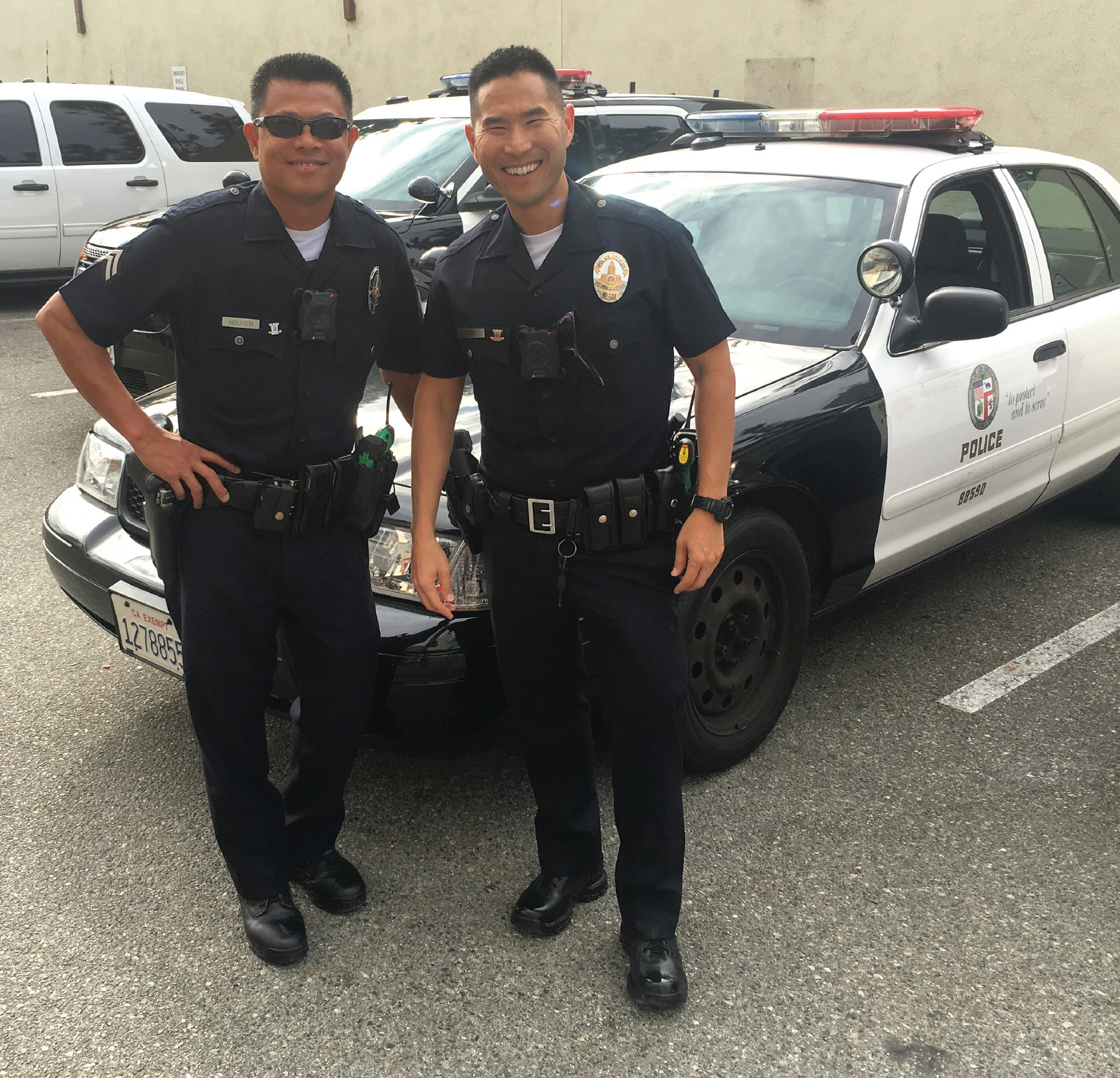 It was game night in Los Angeles, October 26, 2018. Chief of Police Michel Moore had authorized LAPD officers to wear their Dodger Blue caps while in uniform. That night the Dodgers and Red Sox battled it out in Game 3 in what would become the longest World Series game in history — over seven hours of baseball; 18 innings. The Dodgers won that game, 3-2.

It was also the day the FBI and other law enforcement agencies zeroed in and apprehended a serial-pipe bomb suspect, a story that had dominated the news during the week. And the very next day, the nation would mourn after a mass shooting at a Pittsburgh synagogue left 11 people dead and at least six injured, including four police officers.

It was in the middle of all this that NBC Nightly News With Lester Holt broadcast its story about the “Medical Guardian for 10,000 Officers,” the other L.A. team in blue. “As the vice chair of surgery at LAC+USC Medical Center, Officer Kenji Inaba never imagined he’d be called to duty outside the operating room. Now he’s Chief Surgeon of the LAPD.”

At the Oak Tree Gun Club in Newhall,

Lester Holt spoke with Reserve Officer Inaba: “I don’t know whether to call you doctor or officer.”

Holt told viewers that former Chief of Police Charlie Beck had convinced Dr. Inaba “to join the force as a reserve officer.” The segment featured Inaba checking out a beanbag shotgun from the kit room, rolling on the streets in Rampart with his full-time LAPD partner Ryan Nguyen and making his rounds at USC in his white coat “teaching [surgical] residents, training military doctors and saving lives.”

After the segment aired, Chief of Police Moore tweeted: “Kenji represents the heart and passion of both everyday Angelenos as well as the men and women of the LAPD. Our slogan for our Reserve Officers is ‘Twice a Citizen’— and that’s exactly what Dr. Inaba and the rest of our Reserve Officers are the embodiment of.”

Former Chief of Police William Bratton, who also served as Police Commissioner of the NYPD and in Boston, wrote on Twitter: “Officer Kenji Inaba is saving lives as he performs highly complicated surgeries when he’s not protecting the people of Los Angeles. An outstanding life of significance.”

Eric Rose, a 31-year veteran LAPD reserve officer, a partner at strategic communications firm Englander, Knabe and Allen and an expert in crisis public relations management, was behind the scenes helping to put the NBC project together. He told The Rotator: “From the first time I spoke to Dr. Inaba, I knew his incredible story had to be told. When I asked what he would say to others looking into becoming a reserve officer, Dr. Inaba returned to the lesson his parents taught him as a child and said, ‘Everyone should volunteer in their community.’ I can’t overstate how incredible a person Kenji is and what he means to the LAPD and the reserve program.”

NBC Nightly News Producer Katie Wall wrote on her Facebook page: “I was in awe writing, producing and spending multiple days with the busiest man in Los Angeles.”

Kenji Inaba first came to the attention of local media when CBS LA profiled him in January 2016, as he attended the Academy. In the profile, the doctor identified himself to CBS 2’s Serene Branson as “Recruit Officer Inaba of the LAPD, ma’am.”

After graduating from the Academy, Reserve Officer Inaba was assigned to Rampart patrol. Earlier this year, he was named Department Reserve Officer of the Year. As The Rotator was going to press, outgoing Chief of Police Beck, in one of his final acts, established the Chief Surgeon position, appointing Inaba to the position. The June 2018 notice said that the Chief Surgeon will “serve as the primary coordinator of emergency medical programs for officers injured in the line of duty and emergency medical and first aid training programs for LAPD personnel.”

“The appointment of a new Chief Surgeon will ensure that officers injured in the line of duty will receive the best medical care and that the Department’s critical life-saving programs continue to improve with the advanced training and expertise necessary to save lives and prevent serious injuries.”

Of these duties, Inaba told The Rotator, “the biggest is taking care of anyone that is injured or sick, I have probably a dozen folks at any given time that I am helping with a wider range of medical issues.”

A USC newsletter reported on their esteemed colleague, who “moonlights as a cop.” It noted that he still had to go through first-aid training at the Academy. “Even though he is a highly skilled surgeon, he couldn’t skip the emergency medicine course.”

“I sat through every hour of that first-aid training. It goes to show you how seriously they take the process,” Inaba said.

For Jack Webb fans, Dr. Inaba is an M.D., FACS, like Dr. Brackett on the classic TV series Emergency. Per the American College of Surgeons, “the letters FACS (Fellow, American College of Surgeons) after a surgeon’s name mean that the surgeon’s education and training, professional qualifications, surgical competence, and ethical conduct have passed a rigorous evaluation, and have been found to be consistent with the high standards established and demanded by the College.”

When NBC Nightly News posted the story on its Facebook page on that busy Friday night (garnering 500,000 views), it received over 400 comments.

“Dr. Inaba literally brought my Pomona PD motor officer/son back from the brink of death stemming from an on-duty accident on January 10, 2017. He was airlifted from the scene to LAC-USC Trauma Center. We as a family have had an in-depth relationship with this man whom I will always refer to as a miracle worker. My son was not expected to survive out of the ER and Dr. Inaba made it happen. We are forever indebted to him for his skill and compassion.”

And this: “Is Dr. Officer Kenji married? Does he want to be? I offer myself up. Yowza.” To answer this admirer, and the over 120 souls who liked her comment: Yes, he is married with an 11-year-old child. “They are the best,” he told The Rotator.

In the end, Inaba explained to Holt: “The uniform is different than scrubs; you’re carrying a weapon. But your primary role is to help others.”

Holt concluded the segment by saying: “One of L.A.’s finest, in so many ways.”

The NBC Nightly News With Lester Holt segment can be viewed at youtube.com/watch?v=ibil0DU9Xag.