Chief of Police Michel Moore began his remarks on June 26 by noting that the reserve police officers looked sharp on that beautiful morning at the Elysian Park Academy: “Thank you for those Class A’s, for that bit of extra shine …”

The occasion was the dedication of the new plaque honoring Reserve Police Officer Stuart S. Taira. In attendance were Taira’s twin brother, Steve, and younger brother, Ricky. The plaque is larger than the one that was lost during reconstruction of the Academy in the mid-2010s. It reads:

“Stuart S. Taira
Born: December 25, 1954
End of Watch: March 1, 1983
Reserve Police Officer Stuart Taira was killed
in the line of duty as he was attempting to rescue
his partners in a police helicopter crash.
Officer Taira was posthumously awarded the
Los Angeles Police Department’s Medal of Valor
and Purple Heart.
He was a giant of a man. He will be missed.”

Next to the plaque, on the freshly planted flower bed in front of the new classroom building, a memorial granite was also dedicated. The granite is “in recognition of the thousands of reserve police officers and police volunteers who have given so selflessly of themselves in service to the City of Los Angeles.” Below the engraved LAPD badge on the stone, the Los Angeles Police Reserve Corps is listed, along with historical incarnations, the Los Angeles Police Auxiliary, Los Angeles Home Guard and the Los Angeles Rangers. “In memory of our fallen partners who, in the line of duty, made the ultimate sacrifice: Norbert John Huseman, Emergency Policeman, EOW December 31, 1945; George Booker Mogle, Reserve Policeman, EOW August 7, 1946; [and] Stuart S. Taira, Reserve Police Officer, EOW March 1, 1983.”

The ceremony, which started at 10:30 a.m., was officiated by Commander Billy Brockway, who had just been named the new Department reserve coordinator. The Los Angeles Police Emerald Society Pipes and Drums led with a rendition of the “Ian Campbell” musical piece honoring the officer who lost his life in the “Onion Field” incident.1 An invocation was read by Monsignor Frank Hicks.

After thanking the approximately 80 LAPD reserve police officers, who would later attend in-service training that day, Chief Moore thanked the Los Angeles Police Reserve Foundation for making the day possible, “not just financially, but with your hearts, and with the dedication to our people.”

The Chief summarized what happened on that fateful day in 1983. The Southland was experiencing severe weather conditions with heavy rains, flooding and mudslides. A tornado had hit downtown and a command post had been set up at 51st and Broadway, with a landing zone for LAPD helicopters. “Stuart stayed on into the night. He didn’t have to, the day was long, arduous, but he stayed on because we needed him, and he was going to rise to that occasion.”

“In that sacrifice,” Chief Moore said, “Stuart demonstrated what every police officer knows is the ultimate requirement when you swear to this position. You pray that it never happens. He represents 236 men and women of this Department who have lost their lives in the service to the City. Today is an opportunity to demonstrate that we will never forget. That we will always remember. And let us always share with the next generation of cops that come in here who have the privilege of wearing this badge, that that sacrifice is real, and that their work each day lives up to that sacrifice by its quality, by its dedication, of the core values of this city.”

In dedicating the new memorial granite, the Chief said that the ceremony was also an opportunity to step back. “Of over 150 years of our existence, we have had other names, if you will, of what it means to be a Los Angeles Police reserve, what it means to be a volunteer, twice-a-citizen; an individual who works in our community, lives in our community and says, ‘I want to give something back.’”

Chief Moore noted: “It’s fitting that it’s granite, that it’s bedrock, because the three names that are on, including Stuart’s, is a representation of why we enjoy the freedoms we enjoy in this country, this democracy, because of the willingness of those to make that ultimate sacrifice. The willingness of thousands of men and women that this memorial is meant to represent, who in this service to the City, as reserves, as home guards, as auxiliaries, is demonstrating that willingness to live for a purpose bigger than themselves. Blessed are the peacemakers.”

The formal police honors at the ceremony commenced: rifle volley, “Taps” with the LAPD Honor Guard, the pipe band played “Amazing Grace,” a moment of silence and then an LAPD Air Unit made a low, thunderous, solemn memorial flyby.

In the closing remarks, the Reserve Foundation Presidents Karla Ahmanson and Michael Sellars gave thanks to those who made this day possible. Sellars said, “This has been a team effort.” He noted the contrbutions of Reserve Officer Charlie Nicgorski, who had posted in the LAPD Reserve Officers Facebook group asking for a photograph of Taira’s long-lost original plaque, resulting in one of the most engaged posts, and of Reserve Officer and former LAPRF President Mel Kennedy, whose research into the history of the Corps drafted the words on the granite.

For many years, it was a time-honored tradition for reserve recruit officers to keep Taira’s original plaque polished. After the ceremony, veteran Reserve Officer Al Ramos told the story of how a mistake of not polishing the plaque resulted in his class receiving heavy extra P.T. time.

Retired Sergeant Bob Kellar attended the ceremony. He served as the officer in charge of reserve training for 11 years and graduated hundreds of officers. He was instrumental in placing the original plaque.

Lance Odin at Air Support arranged the flyby. President Ahmanson thanked Officer Johnny Gil for the extra efforts he made to make the ceremony a beautiful morning.

On June 30, the granddaughter of Reserve Policeman George Booker Mogle emailed: “Thank you for sending me the photos of the memorial ceremony. My family is very honored with all the attention our grandfather has received. Mom would be so proud. I truly appreciate all that has been done to keep his memory alive. With deepest gratitude, Kathy.”

1For more information on Ian Campbell and the musical piece in his honor, go to https://lapespipesanddrums.org/ian-campbell. According to the site, the tradition of bagpipes being played at LAPD funerals began at the services for Officer Campbell in 1963.
2The issue can be found at https://laprf.org/wp-content/uploads/rotator-summer-2021.pdf. 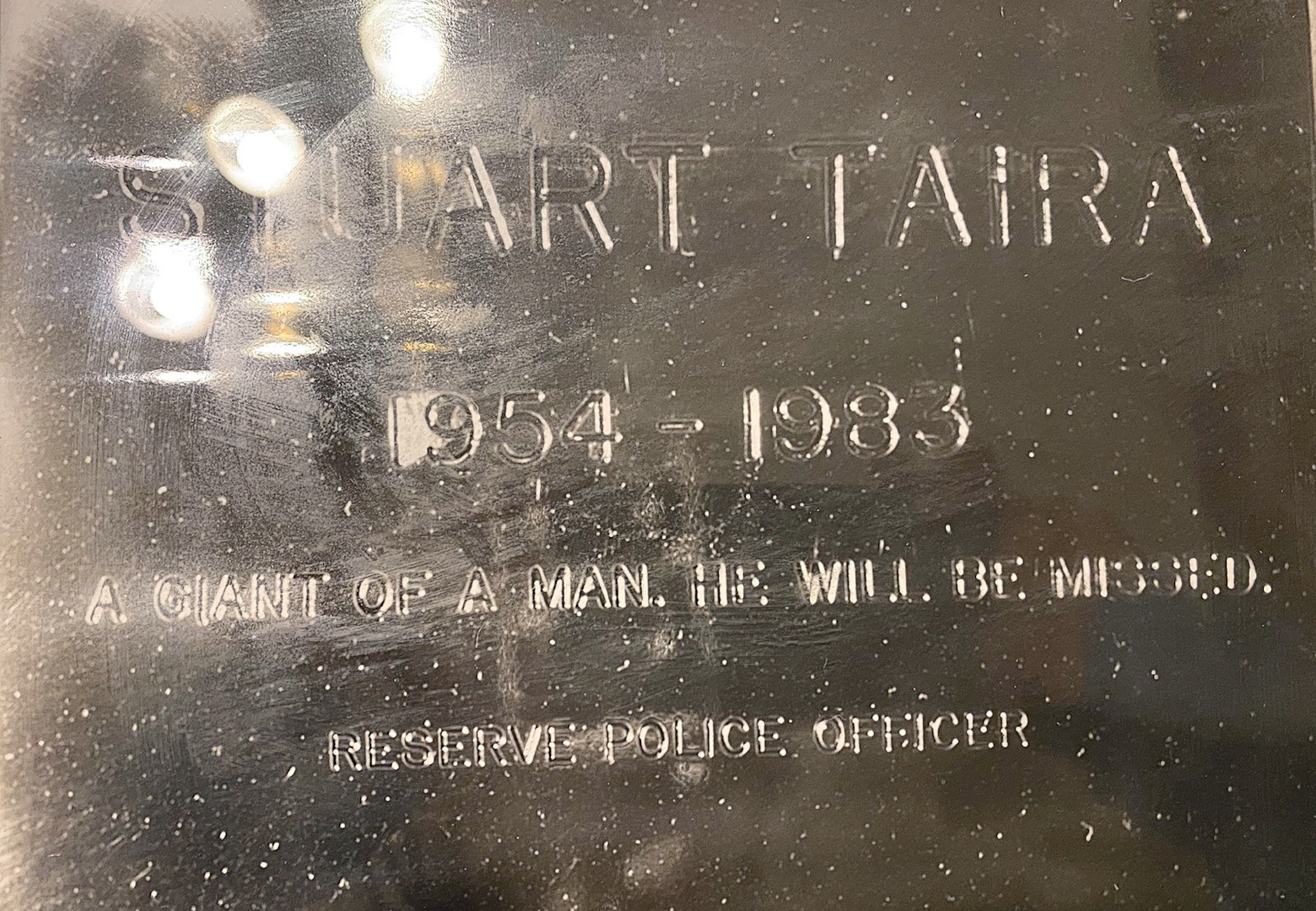 The original plaque honoring Reserve Officer Taira, polished for many years by Reserve Recruit Academy classes at Elysian Park. The plaque was lost during the reconstruction. In his remarks, Chief Moore theorized that one day “we’ll find that plaque.” 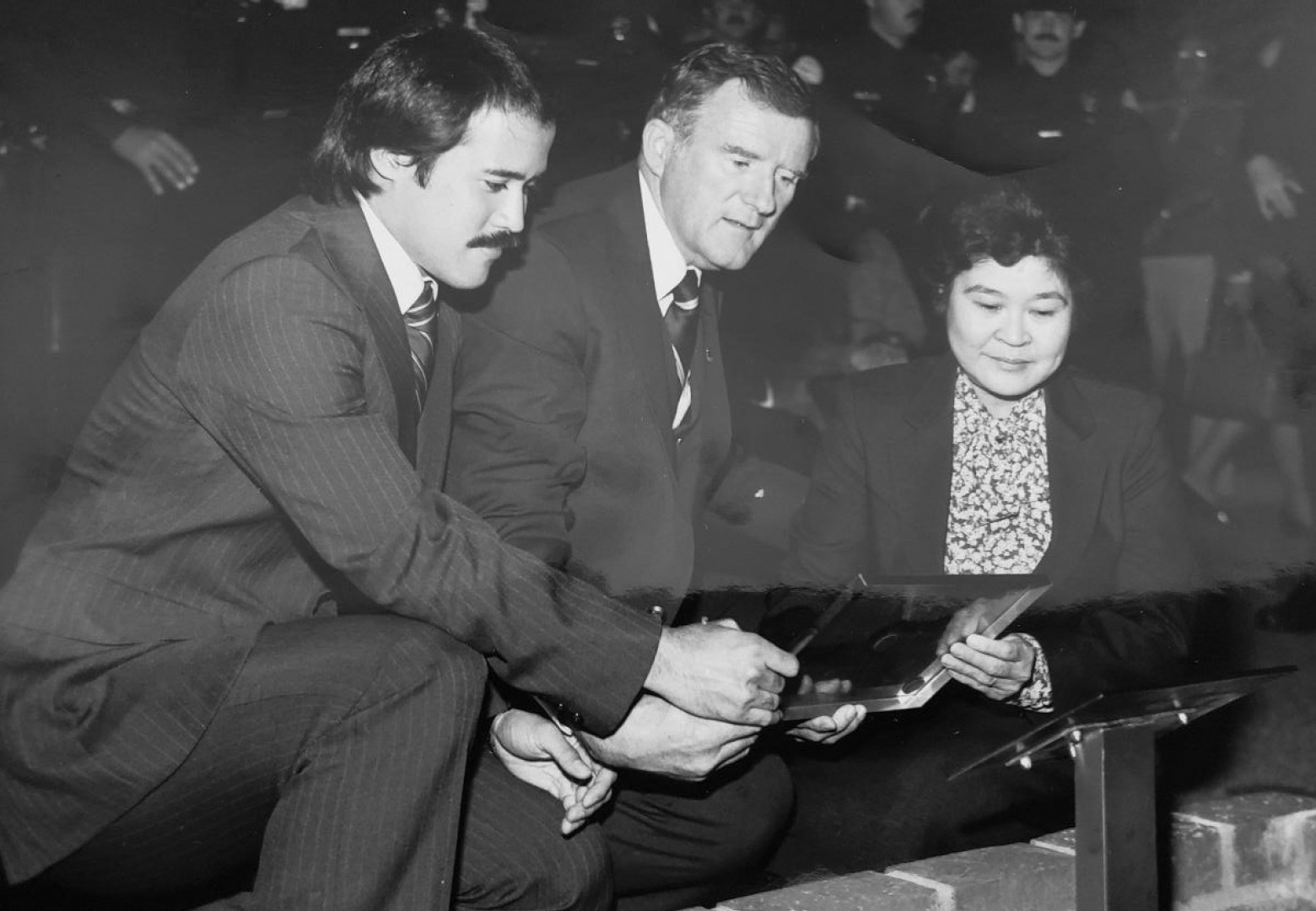