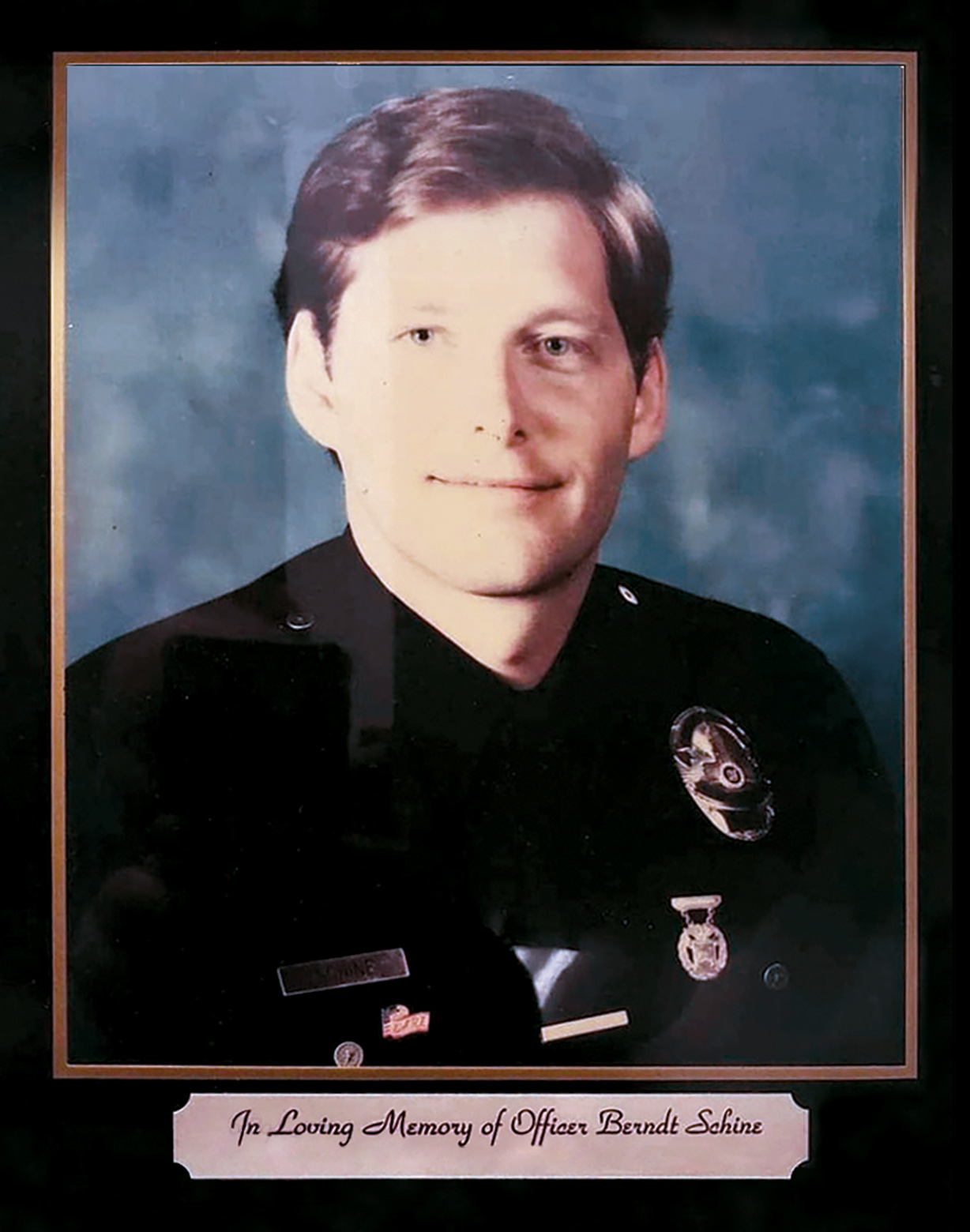 Michael Sellars: “During my last walk-thru at HWD station, before my exit interview with the Captain, I took this picture of Reserve Officer Berndt Schine’s portrait on the wall in the stairway leading up to the locker room and the roll call room.

“I still remember when we heard he and his parents had been killed in a small plane crash on June 19, 1996, in Burbank, and calling our Coordinator Peter Repovich to find out what happened. And I remember seeing Berndt’s station ‘mug shot’ in the Los Angeles Times the next morning: ‘… a local businessman and LAPD reserve officer, worked in the Ronald Reagan and George Bush White House administrations, serving as director of the Office of Intergovernmental Affairs for the Department of Energy during Bush’s term.’ His father was G. David Schine.

“A reminder of the incredible men and women I have had the honor to work with, in HWD Patrol back in the day, and throughout the Dept over the years. Still waters ran deep with Berndt. He is part of the incredible legacy that is the LAPD Reserve Corps.”

Peter Repovich: “Berndt my buddy who first got me into politics, had an unbelievable resume. I was working Hollywood Division as the reserve coordinator, he was one of my reserves; we had a great group of reserves, 80 of them. We became great friends; he inspired me so much I decided to run for assembly. I dragged him into being my chief of staff for my campaign; he created a monster in me, I never stopped. Lots of stories! When we lost him and his two wonderful parents that I loved and adored, I made sure that he wouldn’t be forgotten, so I had that picture put up in a very unique place in the stairwell. Berndt was a super human being. Infectious smile, personality and friend to everyone. One day more stories … miss you brother.”

Gary Hazel: Wow! Berndt’s photo sure brings back a lot of memories. We partnered when the designated [reserve level] program started, including his last watch before he was killed. I was quite impressed with his past White House career and the effect he had on adoring female P/Rs and flag-down contacts who apparently fell in love with his ‘movie star’ good looks…You may not know this (per the NTSB report) his crash was a result of ‘inadequate service of the magneto system’ and ‘failure to replace the electric fuel boost pump’ performed (with gross negligence) by the rental plane maintenance service which led to engine failure just as he was taking off from Burbank Airport. I also recall almost accepting one of his many invites to go flying with him.”

Jerome Wozniak: “I remember Berndt very well from our reserve class 10/90R. He was the nicest guy you could ever meet, a true gentleman. Tragic loss. He was always kind.”

Ernie Poulin: “Berndt! Wow, that brings back memories. Gary, you served with Berndt on so many shifts. I remember your sorrow at the funeral. It tore my heart out. That day when Berndt and his parents met their maker when that plane couldn’t make it over that darn LA cement … ahh, just tears me up. I remember Berndt cheating death one day when getting ready to qualify at the Academy, dropping a 9mm round in an enormously improbable twist of fate when that primer hit that pebble and that round ran up the outside of his head… Such a freak accident yet he survived that just to have an aircraft and a cement barrier take his young life. It was an honor to work beside you Berndt. You are missed even today, but we smile at the good times and smile seeing your infectious smile.”

Joe Fazekas: “I have walked by that photo 1,000 times and never knew all of that. Thanks for sharing this.”