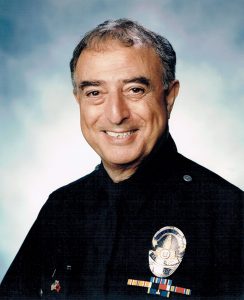 At Eddie’s celebration of life, there was a card on the door at the entrance: “He was finally ready to leave the room.” And this quote from Marcus Aurelius: “It is not death that a man should fear, but he should fear never beginning to live.”

On the card were three emblems: the U.S. Navy, the U.S. Marines and the badge of the LAPD — all three organizations joined by Reserve Police Officer Eddie Kafafian, who influenced each in so many ways for so many years. Of course, there was also his work as a columnist for Variety magazine — he knew more stars on screen and off than you might imagine. Eddie and Leah’s Christmas party was the best ticket in town, on historic Genesee Avenue, south of Sunset Boulevard in Hollywood Area. His home was built in 1919, seven years before Eddie was born. On the walls of the bar was Eddie pictured with just about every iconic actor you can think of: Clint Eastwood, Robert Redford, Mickey Rooney, Jackie Gleason and Gloria Swanson; and there are framed letters from John Wayne and Judy Garland.

“So, July 4th! I’ve been thinking about when I should announce this sad news, so now is an appropriate time. Many of you know my friend, Eddie. It saddens me to say that he is in his final days. I know I’m the ‘tough guy’ but let me tell you about the toughest guy I know. He served in the Navy toward the end of World War II, then joined the Marines afterward. Never had a boring day in his life of almost 91 years. Was a friend to all and enemy to none. If any of you had the pleasure of knowing or meeting him, you know I speak the truth. I have so many stories. He had a wonderful life and an awesome wife and true lady, Leah, who still amazes me that she was able to ‘keep up’ with Eddie. I should say ‘put up’ with Eddie, ’cause that’s what I usually tell her. My point is, remember this, when you hear about the ‘greatest generation’ of the WWII era: It was because of people like him.”

At the celebration, Assistant Chief Bea Girmala reminisced how Eddie always asked her how she was doing, making sure everything was all right. Rare, she noted, that officers ask their supervisors about such things. Reserve Officer Trevor Ingold took upon himself the task of determining which LAPD service ribbons Officer Kafafian had earned. Turns out, quite a few. He presented the solid lineup on a plaque, a record of over 25 years of service. In the final months, Officer Ingold and his partner, Bernard Khalili, never failed to visit their friend in assisted living. In fact, so many cops — in and out of uniform — visited Eddie that he was the star on a daily basis. The humor could be ribald; Eddie enjoyed every minute of it.

Reserve Officer Jackie Ellis recalled that it was her 20th wedding anniversary with retired full-time Motor Officer Steve Ellis: “On a crazy idea, we decided to go to Vegas and stage a mock wedding. Well, Vegas is Elvis, and Elvis is Vegas. Eddie was going to give me away. So about 20 people are in the room and Eddie steps out of the bathroom in Elvis wig, white pantsuit, Elvis glasses, and we strutted down the aisle. He was in character the whole time. It was getting him out of character that was the problem. As usual, he was a hit. My LAPD partner and best buddy.”

Eddie had the gift of gab, and his friends remembered many of his sayings. Officer Pamela Anthony, reserve coordinator at Hollywood, recalled Eddie quipping to her, “Hey Pam, it’s time for me to vote for the Oscars, which film do you want me to vote for? It’s that time of the year!” Sergeant Darrell Davis at Hollywood recalled Eddie saying, “Hey, Sarge, let’s go to lunch at Barney’s, you gotta eat.” Long-time veteran Reserve Officer Georgia Jones remembered Eddie greeting her with a kiss and a hug: “How’s my Georgia Peach?”

In 2001, Officer Kafafian was elected to the Board of the Los Angeles Police Reserve Foundation, and he most recently served as director emeritus.

This author remembers partnering with Eddie years ago at the Hollywood Christmas Parade, on the lost child detail. At the very end of the shift, we finally received a lost child at the substation, a little boy about six years old. While other officers went EOW, we proceeded to take the child home, a midnight drive into Rampart Area. Eddie was talking to the young man. We finally got to the boy’s house. His parents were so grateful. I remember being the cover officer, focused on tactics and officer safety, as Eddie engaged with the parents in what I recall was some great, heartfelt advice.

The Los Angeles Times reported on July 28: “Eddie passed away at the age of 90 on July 9, 2017. Born in New Jersey, Eddie was a voting member of the Academy of Motion Pictures Arts and Sciences. Eddie received two honorable discharges from the Navy and the Marine Corps. After WWII, Eddie became an actor and appeared in films including Shake, Rattle and Rock! with Fats Domino. Eddie segued into reporting for Daily Variety, which included his own music column, ‘Clef Dwellers.’ After leaving Variety, he went into publicity for several studios including Warner Bros., Universal and MGM, and retired as director of publicity and promotion at 20th Century Fox working with studio head Alan Ladd Jr. During his studio years, among the people Eddie worked with are John Wayne, Clint Eastwood, Robert Redford, Judy Garland, Mickey Rooney, Anthony Hopkins, James Garner, Charlton Heston and Mel Brooks. After retiring, Eddie joined the Los Angeles Police Department as a sworn reserve officer for 26 years. He leaves his wife, Leah; a son; a grandson; a daughter-in-law; and two nieces.”

High above the celebration, an LAPD airship did a flyby. “No doubt,” one friend said, “Eddie is somewhere up there thoroughly enjoying this fantastic day. Cut. Print!”