Michael Wade joined the Los Angeles Police Department family as part of Reserve Class 10/88R in October 1988. He was assigned serial number R1740. Along with his Academy classmates, Mike endured and thrived throughout his training.

Mike chose Rampart Division for his first work assignment. There, he worked with a good friend, Dave Genders. They made a reputation for themselves as the hardworking, “We’ll get the job done” kind of fellows. Community events and task forces became a way of life. The two briefly worked Central before returning to Harbor, where Officer Wade flourished.

Harbor was close to home and gave Mike the opportunity to help those in his hometown. He went back to the Academy in 2007 to become a Level II officer. He and classmates Hirad Rowshan and Mike Downs became the “go-to” team. Mike took ATV training so that he could help out in more ways at events. Whenever there was a task force, the “three amigos” were called, and they were always ready to serve. Car rallies, parades, community gatherings, Helping Badge Christmas projects, curfew task forces and patrol duties were their passions. There were also call-ups to work special enforcement task forces in Rampart. Mike knew the area well, and this team was always relied upon to provide support. 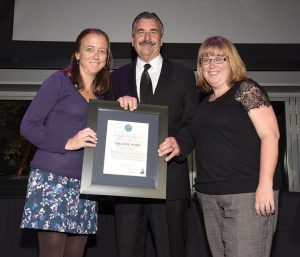 One project that he was especially proud to assist with came up in 2015. A call-out was made to all reserves to help escort runners for the Special Olympics Torch Run across the country. The duty would last for at least a week. Officer Wade was one of the first to respond. He was assigned to provide escort from Maine to the middle of our great nation. A brand-new patrol vehicle was shipped to Maine, where Mike joined many other agencies for escort duties. He was very proud to wear his LAPD uniform for the duration of the assignment. He said that people were so excited to meet a real LAPD officer that they all wanted to take pictures with him. Mike was an excellent representative for all of us.

In 28 years with the Department, Mike logged over 20,000 patrol hours without one complaint lodged against him. He had numerous commendations from citizens and supervisors. The phrases “work ethic of high caliber” and “amicable yet strong communication skills” were listed.

And yet, as great as his accomplishments as a reserve officer were tactically, he also did what each of us holds as the ultimate goal of the Corps: serve the community in which we live and still put our family at the top of the list of those we serve and care for. 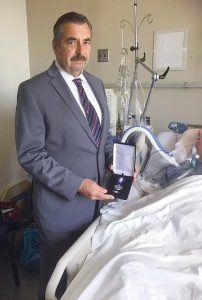 Mike made sure to have time available for his family and friends. It was not just making sure to be there for the big events, but also adding special little moments to each day. His daughter Jen told us of the times he would leave some money under her windshield wiper with a note that told her to grab her morning coffee “on me — Love, Dad.”

Mike was taken away from us much too soon, but even in this he gave us the extra time we all needed to say our goodbyes. On January 12, 2017, in an off-duty incident, he was struck by a car driven by a burglary suspect who was attempting to flee the scene. Mike eventually succumbed to his injuries from the assault on January 30. Shortly before that, Chief of Police Charlie Beck visited him at the hospital and awarded him the Department’s Purple Heart. Officer Wade became the first reserve officer to receive the award while still alive.

We are proud to posthumously nominate Officer Michael Wade as Harbor Area’s Reserve Officer of the Year.