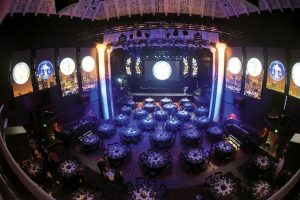 April was once again Reserve Appreciation Month at the LAPD. This year, the appreciation was expanded. After a recruitment video starring Dr. Shaquille O’Neal was revealed at the April 16 Twice a Citizen banquet, Chief of Police Charlie Beck issued an “order” asking every reserve officer to recruit one reserve this year. Later in the month, the L.A. City Council and the L.A. Dodgers recognized the Reserve Corps and honored the Reserve Officers of the Year.

This year, the Twice a Citizen banquet was moved to the historic 1920s Avalon nightclub in Hollywood, with its state-of-the art audiovisual equipment. It was the perfect venue as LAPD and Hollywood history came together, with Adam-12’s Kent McCord being honored as Twice a Citizen. 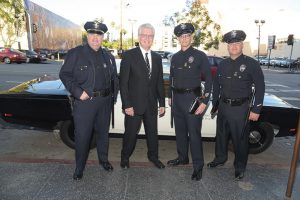 The Avalon — located on Vine across the street from Capitol Records — has hosted the likes of Bing Crosby and Frank Sinatra, as well as the Beatles’ first West Coast gig. According to the venue, “Skilled craftsmen worked around the clock in late 2014 on the meticulous restoration and dramatic upgrade.” Outside the entrance on banquet night, arriving guests were greeted by the Vintage L.A. Coppers, dressed in period uniforms, including the distinctive eight-point cover. The Adam-12 tribute car, owned and operated by Specialist Mark Galoustian, was a center of attention. When Kent McCord arrived, he took a moment: “Let me take a photo with the car I used to ride in.” Tourists and other curious onlookers were wide-eyed at the scene. Once inside, guests were treated to a complimentary welcome cocktail made with Dan Aykroyd’s Crystal Head Skull Vodka.

The ballroom, bathed in blue light and with admittedly rather packed seating, featured the seals of the LAPRF, the LAPD and the City of Los Angeles towering above, against the background of the city skyline, projected onto large screens. With the classic columns of the ballroom, it was an impressive sight.

The co-hosts for the evening were Hollywood veterans Patricia Heaton and Robert Hays. Following the presentation of colors by the LAPD Honor Guard (including the national anthem sung by the Guard’s Officer Rosalind Curry) and the invocation by Friar Michael McCullough, LAPRF Co-Presidents Karla Ahmanson and Michael Sellars opened the evening with two videos played on the large monitor in the ballroom, including the new reserve recruitment public service announcement. The one-minute video featuring Dr. Shaquille O’Neal is part of the ramped-up recruitment efforts and the new “RE/serve” campaign supported by the LAPRF. In the spot, Shaq says he’s “gone from rebound to reserve” (see article on page 15). The CBS L.A. news story “Surgeon Trades Scalpel for Glock” (see article on page 12) was also shown. 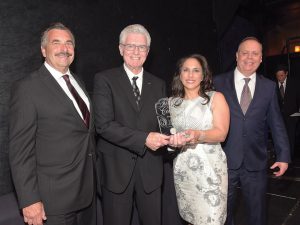 Officer Bernard Khalili was named the Department Reserve Officer of the Year. Officer Khalili received the award for both West Bureau (Hollywood) and Counter-Terrorism and Special Operations Bureau (CTSOB). 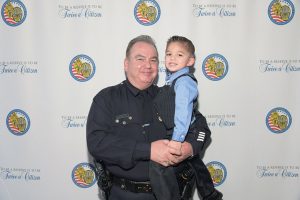 Service pins were awarded for 25, 30, 35, 40 and 45 years of service. Over 20 officers received their 25-year pins, including many from classes  5-90R and 5-91R. Forty-five-year pins were presented to Officers Jim Dellinger (Devonshire) and Jim Lombardi (Central).

The Chief followed up on the Shaq PSA video: “So I am the Chief, so some of you work for me — all of you work for me,” he smiled. “So I get to ask something. And as all my direct reports know, when I ask that means that’s an order. This is what I want from every reserve here: Take that PSA. Take what’s in your heart. Find me one more reserve this year. One — that’s all I ask. And I’ll make sure that [Lieutenant] Darnell [Davenport] puts enough Academy classes through [so] that all of them get to do what you do — which, maybe more than any Chief before me, I understand not only the value, but the satisfaction that it gives you. Because there is nothing better in life than doing a great thing. And what all of you do is a great, great thing.” 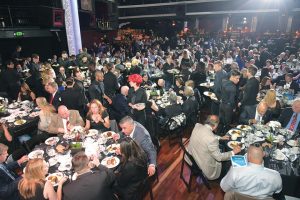 The LAPRF presented its Friedman Award to Chief Beck. The award, named after former LAPD Reserve Officer and LAPRF Board Member Andrea Friedman, who passed away in 2014, is presented to those who go above and beyond in supporting the Reserve Corps. 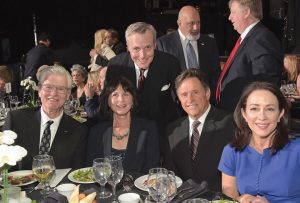 Kent McCord’s “commitment to helping law enforcement has never wavered,” the Chief said. In 2003, McCord was sworn in as the first reserve officer in the history of the Los Angeles Unified School Police Department. His badge number was 2430, the same badge number he wore on Adam-12. “Kent has long been a friend of the LAPD and, as Officer Jim Reed, he will be acknowledged for helping to bring realistic police work to the small screen.”

Of Martin Milner, who passed away in September 2015, the Chief said: “His funeral was attended by an outpouring of friends and law enforcement alike. His participation in Adam-12 will keep him in the hearts and minds of law enforcement and the general public for a long time.” A short video of Adam-12 clips was played. 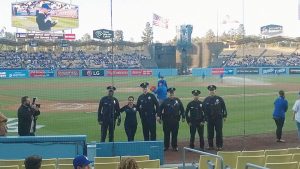 Mr. McCord recalled how he met Jack Webb during the filming of the Dragnet television show in the 1960s: “I appeared as a uniformed officer in one of the early episodes and then Jack had an episode written that was a three-character show.” That episode was called “The Interrogation” in the first season of the series, and guest-starred McCord as a rookie undercover officer. (In his introduction, Chief Beck had recalled how that particular episode — about an Internal Affairs investigation — influenced him in his career.) The episode, originally aired in 1967, is also known for Joe Friday’s famous “What is a cop?” speech: “All at once you lost your first name. You’re a cop, a flatfoot, a bull, a dick, John Law. You’re the fuzz, the heat; you’re poison, you’re trouble, you’re bad news. They call you everything, but never a policeman.” Friday finishes the speech, “But there’s also this: there are over 5,000 men in this city, who know that being a policeman is an endless, glamorless, thankless job that’s gotta be done. I know it, too, and I’m damn glad to be one of them.”

Councilmembers Joe Buscaino and Mitchell Englander with fellow LAPD reserve officers holding Englander’s challenge coin, which was given to each of them.

McCord recalled several moments that have stayed with him — the professionalism he saw in the LAPD during ride-alongs, particularly during an otherwise routine loud party call, and how Adam-12 raised that image even higher. As one officer told him, “We gotta live up to your image.” Another officer related: “We can mark pre-Adam-12 and post-Adam-12. I can tell the difference in the way kids approach us.”

The banquet’s very lively live auction, run by Kelley Nelson, helped to raise much-needed funds for the Corps. The Twice a Citizen banquet is held annually by the Los Angeles Police Reserve Foundation and is managed by The Proper Image Events. 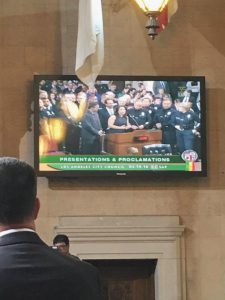 The video monitor in the Council chambers during the presentation

In the days after the banquet, the appreciation and recognition continued. On April 19, L.A. City Councilmembers Joe Buscaino and Mitchell Englander stood with their fellow reserve officers in the historic City Council chambers (coincidentally, City Hall was under construction in 1927, the same time the Avalon was built). They presented Certificates of Recognition, stating in part: “We commend you for providing invaluable service to the City of Los Angeles. Your passion, dedication and commitment to the LAPD is extraordinary.” It was mentioned in the presentation that the hours and duties worked by reserve officers contribute $4 million in service. (Councilmembers Buscaino and Englander also serve as LAPRF Board members.)

The following week, on April 25, the Los Angeles Dodgers took a moment to show their appreciation. Several officers, in their class As, walked onto the field to applause and were featured on the large “DodgerVision” video screen. The screen said: “Welcome LAPD Reserve Officers of the Year.” 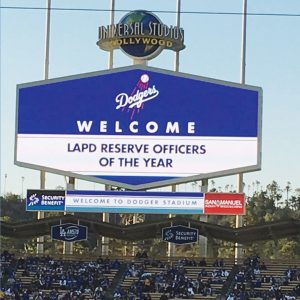 Pictures of the Reserve Officers of the Year and service pin presentations at the banquet were uploaded to a private Google Photos album and made available to Reserve Corps members. Selected photos of the banquet were posted on LAPRF’s Facebook page. Questions can be sent to msellars@laprf.org.