The video is 59 seconds long: Three LAPD reserve officers race down an arduously narrow trail: brush, rocks and other bumps in the road along the way, in the hilly terrain, the Pacific Ocean a breath away. They have achieved another milestone in the Department’s reserve program — graduating from the elite off-road Dual-Purpose Motorcycle School. 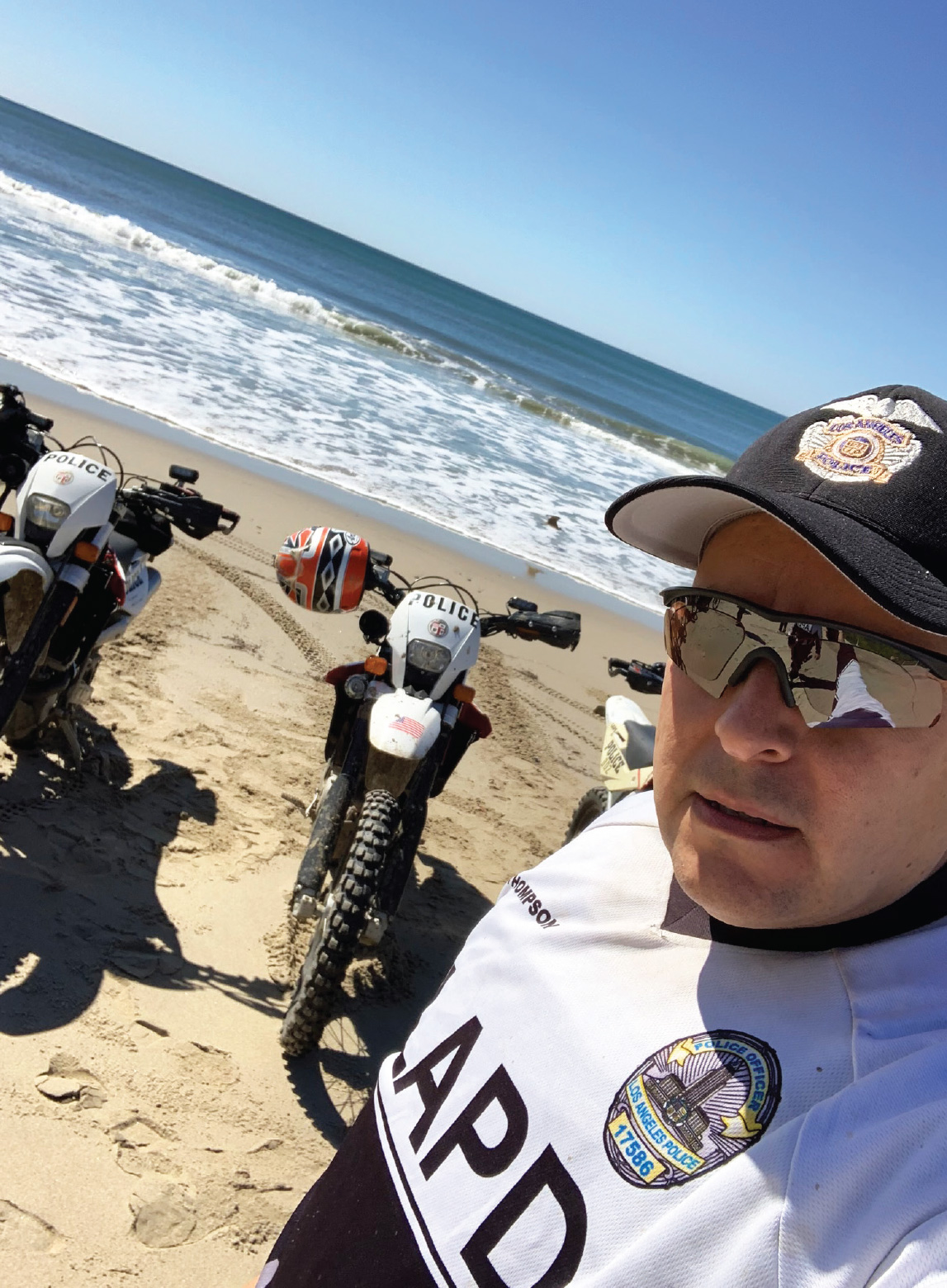 In March, three reserve officers — John Choplin, Eric Ortiz and Brian Pearcy — completed the school, the first LAPD reserves to do so. It all started about two and a half years ago. On the annual Unity Tour, Officer Ortiz met Officer Steve Carbajal of the Off-Road Unit. Carbajal invited the Reserve Motors to join the unit and arranged to get the officers the training orders to attend the class.

In 2013, NBC4 News reported about the unit in the story, “Elite LAPD Unit Goes Off-Road to Nab Burglary Suspects.” “They’ve never seen these bikes before — even members of our own Department, they don’t realize we exist,” Carbajal said.

LAPD officers must be a Motor to attend the class. The first two days are spent at Davis Training Facility, then two days on the street/off-road. Six students (three full-time, three reserves) attended with five instructors. 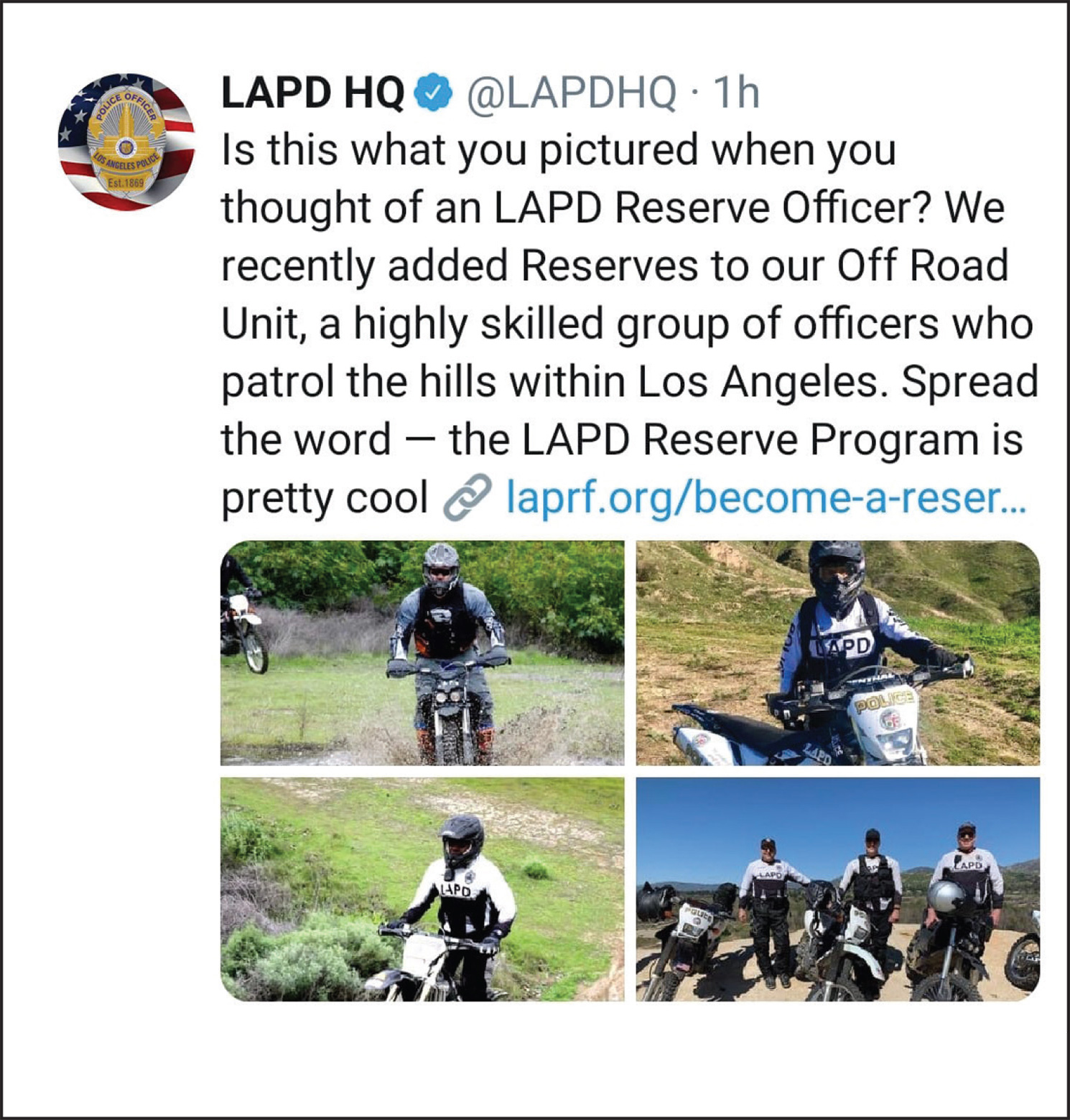 This milestone for the reserve program builds on the “Motor Ducks,” the first all-reserve Motor School in 2005. Then-Assistant Chief Michel Moore told the Los Angeles Police Commission in 2015 that the idea for the unit sprang up in 2004, and was evaluated: “We said, these officers would have to go through and understand the rigors of the Department’s motorcycle program and have to maintain proficiency in the operation of a bike. We have very high standards on that.

“I remember it well because we said, ‘Let’s start it at Davis, February of 2005,’ and someone said, ‘What about rain?’ I said, ‘Not in California.’ And that month it was the rainiest month for six weeks that they had in, like, seven or eight years. And they actually came up with rubber ducks as their mascot.

“But that team is really the remaining core team today. They are hardworking Level I reserves that transitioned to motor bikes (and) have a love for it like motor officers have to have, and have remained persistent.”[1]

Officer Ortiz tells The Rotator the Dual Purpose Motorcycle School is very similar to Motor School, but with a different motorcycle and a totally different mission. “We will be patrolling rivers, washes, hillsides and any remote area for illegal fires, homeless issues, rivers for possible flood victims, burglary suspects and assisting with underprivileged kids’ motorcycle instruction.” The officers will remain assigned to West Traffic and help out as needed or as available.

Officer Ortiz sums it up: “Being a LAPD Motor is challenging, but very fun! [We] have had the privilege to work with some of the best details in the Department.” 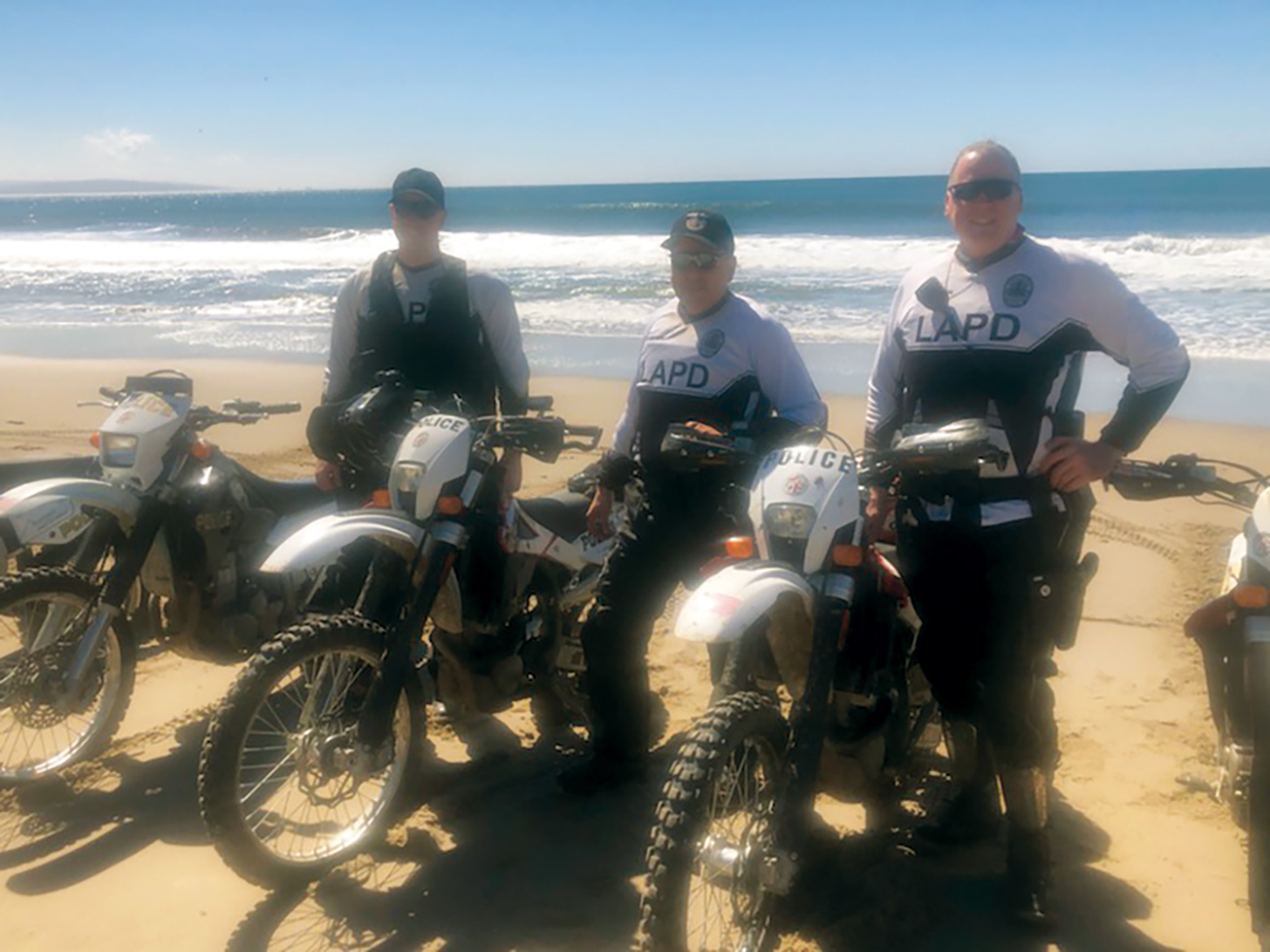