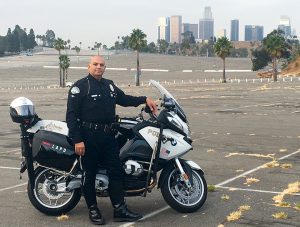 He told The Rotator: “As a kid I watched the CHiPs TV show. It intrigued me and inspired me to become a police officer. I applied to join LAPD but there were no full-time positions at the time, due to a hiring freeze.” He joined the reserve program, Academy Class 4-97R. He did his probation at HWD Patrol, transferring to WTD in 2006.

He first applied and was accepted into motor school in 2009. Two days prior to graduation, Wassef came down with a stomach virus, which led to severe hydration and kidney failure. “I lost my chance to graduate. Afterward, the LAPD had no motor schools scheduled until recently,” he said. Officer Wassef reapplied for the February 2017 class.

Motor school is a two-week course, plus two weeks of riding with the Specialized Enforcement Section (SES). “It was the most challenging thing I have ever been put through in [my] life,” Wassef said. He took a vacation from his primary career as an 18-wheeler truck driver at CVS Stores to attend the class with full-time LAPD and officers from other agencies. In fact, he didn’t have enough vacation time. “I put myself on LOA [leave of absence] with my work, which means for a month [I] didn’t have any income.”

Wassef continued, “The course includes all kinds of terrain. Braking techniques is the number-one reason most of the officers are washed out of the school. Although the new motorcycles have ABS [anti-lock braking systems], instructors have you turn it off throughout the school. The rider must be able to control braking exercises without locking the wheels. Braking is just one of the highlights of how difficult motor school is. There is dirt riding, hill, skid, slalom and the timed-road course. The school doesn’t teach you how to ride, but to bring a rider out of you. Most of the officers who went to the school have practice bikes, purchased or rented. I had neither. I was not able to afford a practice bike, due to transition to BMWs from Harley. I was more determined and committed than anything else when I attended. I did not practice nor have I ridden off duty for quite some time. I was focused on graduating the school and not letting fear of not passing take control. I’m sure there were fun moments, but I was too intense and serious to remember any.”

After the course, Officer Wassef rode “with SEC every day on Los Angeles streets and freeways … to ensure the ability to handle normal working shifts as a motor, conducting traffic stops.” After being cleared, he reported to his division, WTD, for what’s called “mother hen”: riding with a senior officer for a few days to cover the dos and don’ts.

In the Winter 2015 issue, The Rotator reported on the September 15, 2015, Police Commission meeting, which covered several reserve program issues at the time. The subject of the “Motor Ducks” came up:

“Commissioner Robert Saltzman asked for information on the Reserve Motors, inquiring why only West Traffic Division had a unit.

“Chief Beck replied: ‘I’ve been through motor school. Motor school is the hardest school in the Los Angeles Police Department. And every one of these reserves had to go through it. And, to find eight, that’s pretty good.… They handle a lot of special events, things that would take our Motors away from their traffic enforcement duties and limit our ability to improve traffic safety in the city.… It was something that was created out of an enthusiasm.’

“He then asked Assistant Chief Michel Moore to provide some history on the Reserve Motors. Chief Moore said that the idea for the unit sprang up in 2004, and was evaluated: ‘We said, these officers would have to go through and understand the rigors of the Department’s motorcycle program and have to maintain proficiency in the operation of a bike. We have very high standards on that.

“‘I remember it well because we said, let’s start it at Davis, February of 2004, and someone said, what about rain? I said, not in California. And that month it was the rainiest month for six weeks that they had in like, seven or eight years. And they actually came up with rubber ducks as their mascot. But that team is really the remaining core team today. They are hardworking Level I reserves that transitioned to motor bikes, [and] have a love for it like motor officers have to have, and have remained persistent.’”

The Rotator asked Officer Wassef if he had any advice for reserve officers interested in following his path. He said, “If you have a dream, don’t give up on it; keep at it, even if you fail. There is always a better chance of making your dream a reality when you fail, because you have already been exposed to the negatives. When there is a will, there is always a way.”

He concluded: “Being a police officer is a rewarding job [and then] you get your own motor and the gear to take home — and when you look down on those handle bars and it reads your name, it’s the grandest award anyone could possibly achieve.”