California Senate Bill 2 (SB2), signed into law by the Governor in 2021, in part establishes a process in which POST certificates can be revoked for what is defined in the new law as “serious misconduct.” Under this law, the decertification means you would no longer be eligible to serve as a peace officer in the state.

Reserve Peace Officers appointed to POST-certified agencies, which includes the Los Angeles Police Department, will be subject to these new regulations. Further, while Reserve Levels II and III are not issued POST peace officer certificates, they must still have a Proof of Eligibility (POE) which would also be revoked if the process determines a decertification of the officer is warranted.

Even though a reserve officer’s livelihood may not depend on a POST certificate or a proof of eligibility for primary employment in law enforcement, a revocation — the process of which includes public hearings, and having the decisions published — may have consequences affecting your civilian or military employment, your businesses and other parts of your life. Even if you are exonerated and retain your certification, third parties will have had access to the proceedings.2

The Los Angeles Police Protective League is offering an enhanced SB2 legal plan to LAPD Reserve Officers. Officers must sign up by September 30, 2022 for retroactive coverage, as described at the end of this article.

“Serious Misconduct” as defined, which can lead to decertification:

While some of SB2 went into effect this year,2 the decertification process will go into effect January 1, 2023. Officers will be subject to decertification – a permanent revocation or in some cases a suspension (for up to three years) for the following, defined as serious misconduct:

POST can take action against a certification for misconduct which occurred prior to January 1, 2022, for the following serious misconduct:

As you can see, some of the language is vague, not fully defined, such as unreasonable, abuse of power and sufficiently egregious.

SB2 establishes a new POST Division to review cases for peace officer decertification: Peace Officer Standards Accountability Division. The new Division will not have the infrastructure to be an internal-affairs type of operation. The primary responsibility for investigating will remain with the officer’s agency. As per the illustration below, there is a step-by-step process for decertification, which begins with a Division review. 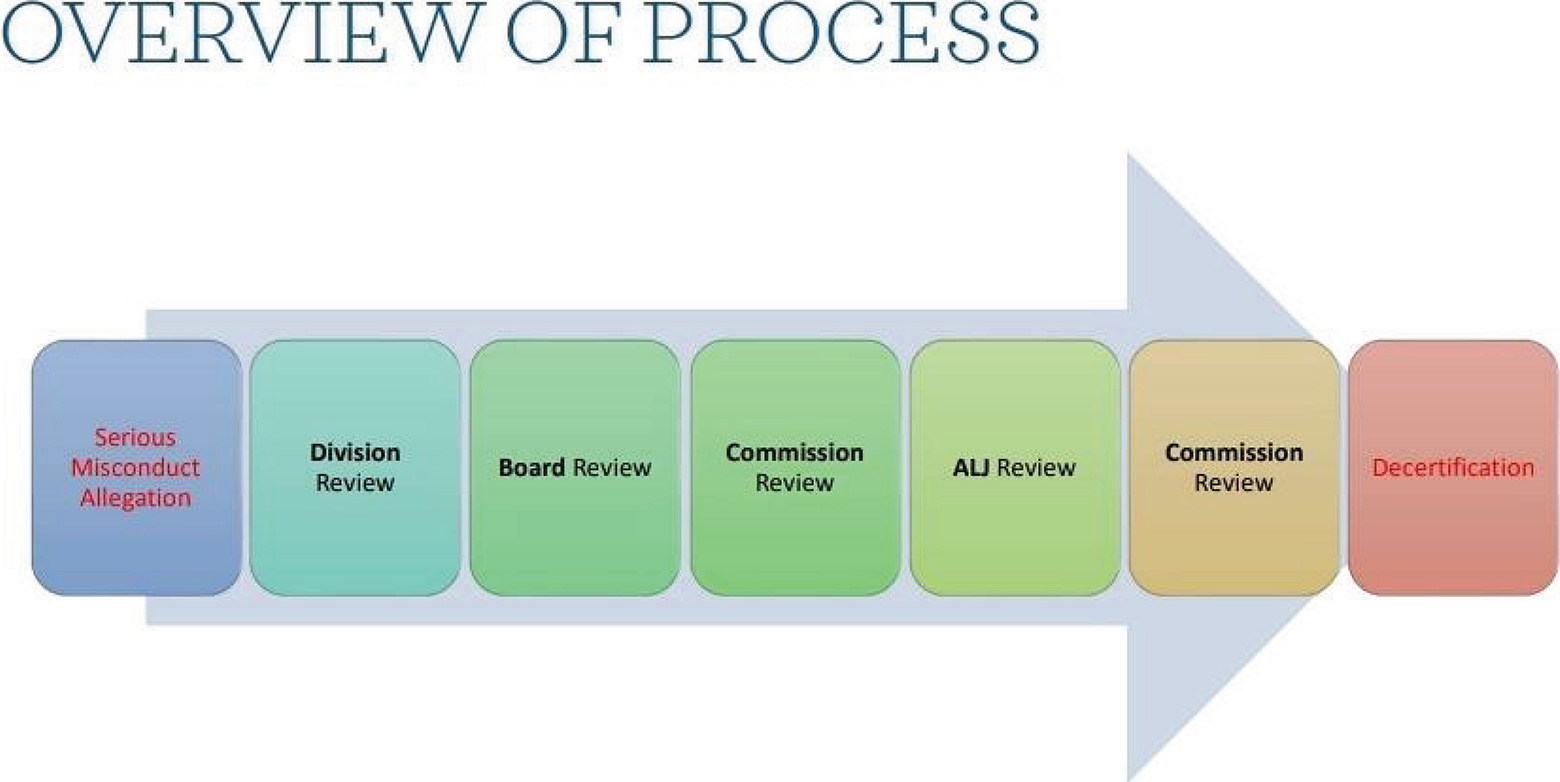 Excerpt from the ARPOC 2022 presentation on SB2, illustrating the overview of the step-by-step process for decertification. Source: Commission on Peace Officer Standards and Training.

If the Division concludes there is reasonable grounds for decertification, the process will continue through each step, unless it is stopped at any step. It includes an evidentiary hearing by an Administrative Law Judge (ALJ), and ends with a second Commissioners’ hearing.

One step in the process is the new nine-member advisory board, set up to give a voice to those in the community involved with “police accountability.” Only two of the nine members on this board can have any peace officer experience. A controversial part of this board is that two members are to be appointed with “strong consideration given to individuals who have been subjected to wrongful use of force likely to cause death or serious bodily injury by a peace officer, or who are surviving family members…”

One of the myths is that this board will have the power to counter POST commissioners’ findings that would exonerate an officer. But, in its current structure, this board is only a step in the decertification process that is “bookended” by other stages that would prevent such unilateral judgements.

The Protective League is offering the enhanced legal defense plan to LAPD Reserve Police Officers, to defend against this new decertification process. The annual cost of this SB2 enhanced coverage is $360, which is in addition to the current annual legal plan and membership fee. The application was emailed to reserve officers on August 4. Once your application is accepted and approved you must request a bill be sent to you; the request should be sent to: cleme@lappl.org. Currently the Reserve Foundation does not offer reimbursement for this enhanced plan.

You must sign up for the enhanced coverage by September 30, 2022 for the coverage to include representation for cases involving the aforementioned specified misconnect that occurred prior to January 1, 2022, dating back to your appointment date.

The implementation of SB2 continues to evolve, and this article is not a complete or conclusive summary. It is recommended that officers and their families keep up to date on the legislation.

Reference material can be found at: https://post.ca.gov/SB-2

1 As per the course: “This presentation should not be construed as legal advice. Questions about the specific provisions of SB 2, including the applicability to given circumstances, should be discussed with the advice and assistance of competent legal counsel.”

2New disqualifiers from being appointed as a peace officer have been added, including the minimum 21 years of age, which means Reserve Level IIIs must now be at least 21 years of age.