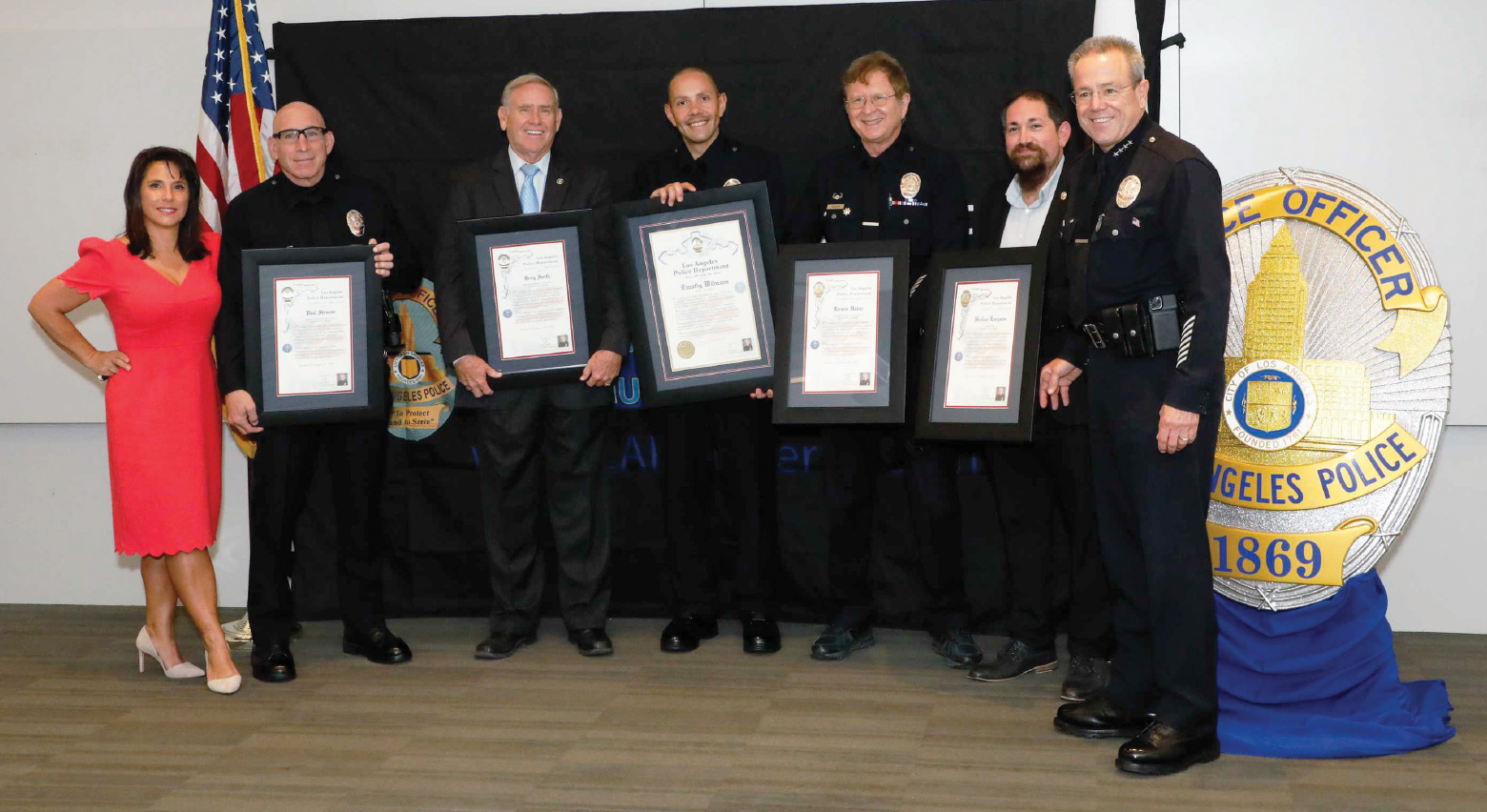 When The Rotator went to press in late May 2020, the cover story was about LAPD reserve officers going above and beyond during the COVID-19 crisis. Then, a new crisis hit while the ink was still wet. The men and women of the Corps stepped up again, still in the middle of the pandemic. The ramifications of what was happening cascaded throughout the nation.

The flashpoint was on May 25, nearly 2,000 miles away, in Minneapolis. But the impact was felt nationwide and around the world. According to Wikipedia, “Protests outside the Minneapolis area were first reported on May 27 in Memphis and Los Angeles … By May 28, protests had sprung up in several major U.S. cities with demonstrations increasing each day. By June, protests had been held in all U.S. states. At least 200 cities had imposed curfews, and at least 27 states and Washington, D.C., activated over 62,000 National Guard personnel in response to the unrest.”1

As LAPD officers headed to work crowd control downtown and throughout the City, full-time officers started noticing the distinctive R-serial numbers on the helmets, and some (even today) did not know what that meant. They soon learned they were joined on the scrimmage line by their reserve brothers and sisters. Police Officer Jonathan Johnson, reserve coordinator for Hollywood Area, wrote: “I have been so incredibly impressed with you and the way you handle business. This civil unrest and mobilization have been long and arduous for everyone. We are all physically and mentally exhausted … My reserves in Hollywood have been here nearly every day since this whole thing started. You come early, you stay late, you’re enthusiastic and you hold the line like the rest of us … Your dedication absolutely blows me away, but I’m not the only one noticing. I can’t tell you how many times my full-time coworkers have commented to me how impressed they are by you guys and the way you’ve handled yourselves on the lines. Your dedication and joy for the job are infectious and truly inspiring, especially at a time when positive LAPD stories are so hard to come by. Thank you all for doing what you do and for representing our beloved Department so well. I will always be proud to have served alongside you.”2

Reserve Officer Dennis Wong: “Deployed last night with a GND MFF downtown. Hundreds of LAPD, CHP, LASD, LAFD and other agencies screaming around Code 3 entrail chasing the crowds. Crazy from 2000-0000 hours, then tapered off quickly. Grateful, and a surreal experience deploying with the NG in our beloved City of Angels.”

Veteran Reserve Officer Steve Fazio told The Rotator that he and his wife were having dinner with friends when news of unrest started coming in after Minneapolis. “I got on my rover to see what was happening at [Topanga]. The division was assigning radio calls to supervisors and dropping calls because most of the watch was being redeployed to downtown.” That’s when Officer Fazio headed to the station. En route, he received a phone call from Reserve Officer Pheap Chev, who was also on his way. The two partnered up at about 2030 hours and worked until 0200.

“The following three days, I worked with Reserve Officer Ronnie Hadar. For several hours we worked with our area detectives and the National Guard; there was some credible intel that the Westfield Plaza Shopping Center in Woodland Hills was a target … Day four, we basically worked the division and handled calls for service, as the division was very lean on patrol with more than half of each watch being deployed to the hot spots. All and all, probably worked 35–40 hours those first few days, and continued to work patrol over these last many months as things would flare up.”

On June 9, LAPD HQ on Twitter reported: “The week of May 31 to June 9, homicides went up 250%, and victims shot went up 56% compared to the previous week. The past 24 hours has seen four shootings, one of those resulting in a homicide.”3

Many veteran reserve officers recall working during the riots in 1992, which started on April 29. In a retrospective 25 years later, NPR wrote: “For the rest of the night, the scene at Florence and Normandie repeated itself with rioters across the city. Just before 9 p.m. that night, Mayor Tom Bradley called for a state of emergency, and California Governor Pete Wilson ordered 2,000 National Guard troops to report to the city.”4 One of the criticisms in the aftermath of 1992 was the general lack of preparation and planning by the City and the Department. Times have changed since then, on a number of fronts, of course. LAPD personnel recently went through IC/DC training (Integrating Communication, De-escalation and Crowd Control) at Davis, a 10-hour class that included training and certification for the 40MM Launcher System and practical exercises on the “scrimmage” line. (This left-handed author learned that southpaws were no longer the default “linebackers.”)

One officer told The Rotator: “What’s really frustrating is that the reforms several of the organizations are asking for5 have already been implemented in Los Angeles. After the [1992] riots, after Rampart, policies have changed.”6 “I look at what happened in Minneapolis, and it’s like watching one of those old Cops TV episodes when you’re yelling at the screen saying, ‘Who the hell taught you to do that!’”

At the virtual tribute to LAPD reserve officers held on August 29, Chief of Police Michel Moore, Assistant Chief Robert Arcos and others talked about how LAPD reserve police officers went above and beyond during the pandemic and the civil unrest. Click here for the quotes, but as Commander Gerald Woodyard said that night, “Individuals are measured by their actions during times of strife and trouble.”

Mike Rowe, who hosted the Discovery Channel series Dirty Jobs, said in his tribute message: “I should apologize, as well as thank you because in 300 episodes, I never got a chance to work with the men and women of the [LAPD Reserve Corps]. And I’m sorry for that. Not because your job is dirty, necessarily, but because you really do make civilized life possible for the rest of us … I know there’s never been a tougher time to be a cop … I think you are heroic. I know a lot of other people feel the same way.” He ended by quoting Hill Street Blues’ Sergeant Phil Esterhaus, “Let’s be careful out there.”

Finally, the images. The pictures below come primarily from the end of May and early June during Mobile Field Force deployment. We printed them mostly without captions, as an archive of a moment when LAPD reserve police officers, indistinguishable from their full-time brothers and sisters, went above and beyond, as they always do.

1 See https://en.wikipedia.org/wiki/George_Floyd_protests#Elsewhere_in_the_United_States.
2 Officer quotes, unless otherwise noted, are from the LAPD Reserve Officers Facebook Group.
3 See https://twitter.com/LAPDHQ/status/1270441223753396224?s=20
4 See https://www.npr.org/2017/04/26/524744989/when-la-erupted-in-anger-a-look-back-at-the-rodney-king-riots
5 An example can be found at https://naacp.org/latest/update-naacp-demands/ dated May 31, 2020.
6 The Christopher Commission was established in 1991. In 2000, the U.S. Department of Justice entered into a consent decree with the LAPD that lasted until 2009. Both led to many policy and tactics reforms within the LAPD.