After 28 months, the Skirball Cultural Center lights lit up once again. Opening the ceremony on September 18, with COVID-19 safety protocols in place, Los Angeles Police Reserve Foundation Presidents Karla Ahmanson and Michael Sellars asked LAPD reserve police officers to stand. “It’s good to see everybody! If there was ever a time to honor our LAPD reserve officers and thank your families, it’s times like these,” Sellars said. “2020 was a year many of us would like to forget. But adversity brings strength, and the Reserve Corps flexed its muscles,” Ahmanson said, introducing a video of a CBS Los Angeles news story about reserve officers on foot beat and working high-visibility patrol (see 2021 Reserve High-Visibility Patrol, Foot Beats).

Officer Strauss, practicing at Cedars-Sinai as a senior anesthesiologist, joined the LAPD Reserve Corps in 2017 to bring his medical experience and expertise to the streets. He took the initiative and presented Southwest Division with “Stop the Bleed” training — part of a national initiative designed to teach bleeding control techniques to first responders. Strauss has worked over 3,000 hours in a four-year span.

Officer Lomis handles a full detective caseload for Robbery/CAPS investigations and conducts follow-up investigations for assigned criminal cases, including criminal complaint interviews and the filing of those complaints. Lomis was recently assigned a complex robbery case. She identified the suspects with forensic evidence and met with the reluctant victim, who positively identified the suspects. Locating the suspects in Nevada, she coordinated the arrest with Las Vegas Metropolitan Police Department, obtained the felony filings and extradition arrest warrants, and returned them to Los Angeles.

Chief of Police Michel Moore served as honorary chair of the gala. He asked donors to “dig deep” into their pockets, “because this Foundation does do wonderful work for the 400-plus men and women who as volunteers work every shift with heart of commitment to service. This last year and a half has been like a time I don’t think any of us have seen as Americans. But I’m particularly proud about the reserve program, which throughout the years has been dedicated to come and demonstrate their resolve to serve. We saw America stay home. We saw America protect itself … But not with the reserves. Just like the rank and file of this organization, they come to work and they come to serve, no matter the threat to their personal safety, and it’s a show of the size of their heart that I am grateful for.

“So tonight, as we honor every reserve officer, whether it’s an area, bureau or the entire city, know that I honor every reserve. You have my gratitude, my respect, and I’m grateful for your dedication. The wives, husbands, brothers, sisters, all the family members: you’re also a part of this LAPD family, because it is your support of them that allows them to go out and do the job that they do for us, for the safety that we enjoy as Angelenos. God bless all of you and thank you for your generosity.”

For the first time, the newly authorized Exceptional Service ribbons for Reserve Officers of the Year were handed out to the honorees — area, bureau and department. The new ribbons were funded by the LAPRF and are available to all active and honorably retired reserve officers who have received the award during their career. The ribbons are one of several Foundation initiatives that Ahmanson and Sellars briefly described, along with BDUs, Scholarships, Legal Defense Subsidy, Tourniquets and the Reserve Memorial.

The Twice a Citizen community honorees were Steve Soboroff and Shemar Moore.1

“Steve Soboroff has long been known as a business and civic leader, public servant and philanthropist” in the city of Los Angeles. He “was a driving force in bringing the Staples Center to reality (keeping the Lakers and Kings downtown). … Appointed to the Board of Police Commissioners by Mayor Eric Garcetti in August 2013, he has served two terms as president and remains on the Commission today. Among other projects, he was also instrumental in the funding of the first 600 body-worn cameras for the Los Angeles Police Department.”

“Shemar Moore is an award-winning actor, model, producer and philanthropist. Currently producing and starring in CBS’ hit TV show S.W.A.T., he portrays a locally born (Special Weapons and Tactics) sergeant.” Previously, he starred in the crime drama Criminal Minds. “In 1998, Shemar’s mother, Marilyn Wilson, was diagnosed with multiple sclerosis. Since then, he has been committed to raising awareness about the disease and is a spokesperson for the National MS Society. He has participated in the annual Bike MS Ride from Santa Barbara to Los Angeles for the last nine years, raising donations for the cause.” 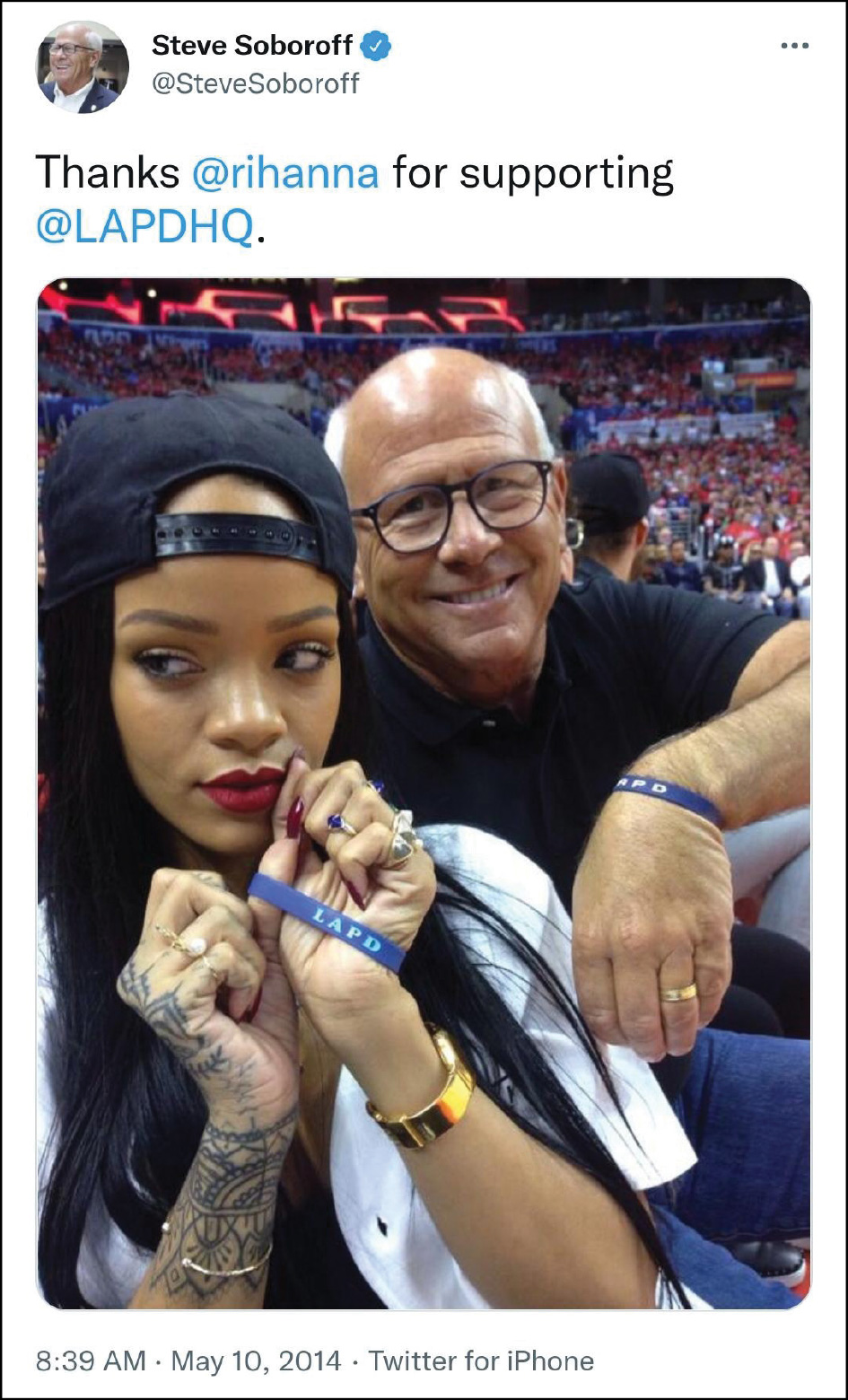 During the awards ceremony, Soboroff presented Moore and Chief Moore with blue wristbands. He told the audience about the time he gave Rihanna a wristband courtside at a Lakers game in 2014, a story that went viral after a selfie went wrong when the singer accidentally dropped Soboroff’s cellphone, breaking it. Rihanna subsequently donated $25,000.

William J. Briggs II, the president of the Board of Police Commissioners, attended the gala. He wrote: “My fellow police commissioners and I thank each and every one of the reserve officers for the brave, unselfish commitments you make each day to serve and protect your communities. You are an outstanding representation of law enforcement, and real heroes for the city of Los Angeles.”

The evening was coordinated by Scherr Lillico and her team at The Proper Image Events.

The next Reserve Officer of the Year/Twice a Citizen gala is scheduled for Saturday, May 7, 2022, at the Skirball Cultural Center.

1Biographical excerpts below from the 2021 Twice a Citizen gala journal, pages 9 and 11.